As the peak of Antarctica’s melt season approaches, surface snow melting has been widespread over coastal West Antarctica, with much of the low-lying areas of the Peninsula and northern West Antarctic coastline showing 5 to 10 days more melting than average. However, much of the East Antarctic coast is near average. Snowfall in Antarctica for the past year has been exceptionally high as a result of an above average warm and wet winter and spring. 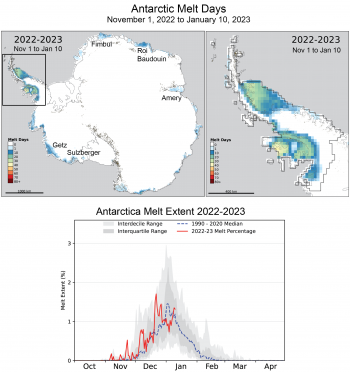 Figure 1a. The upper maps of the Antarctic Ice Sheet (left) and the Antarctic Peninsula (right) show the total melt days for the areas from November 1, 2022 to January 10, 2023. The graph on the bottom shows daily melt extent for the Antarctic Ice Sheet as a percentage of ice sheet area for the same time period in red and the 1990 to 2020 average in blue. The interquartile and interdecile ranges appear in grey bands. 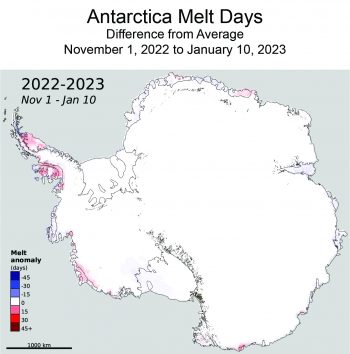 Figure 1b. This map shows the number of melt days from November 1, 2022 to January 10, 2023, as a difference from average relative to the 1990 to 2020 reference period. Reds indicate more melt; blues indicate less melt.

Antarctic surface snow melting through January 10 is above average and reached near-record extent in late December. A significant melt event spread over the Peninsula and across much of the West Antarctic Ice Sheet northern coast and into the Ross Ice Shelf area (Figure 1a). Melting has been moderately above average for the Peninsula areas, but unusually high in the Getz Ice Shelf area, where melting is less frequent. The Larsen Ice Shelf area has seen up to 25 days of melting, about 5 more than average, and the Wilkins region up to 30 days, again about 5 more than average (Figure 1b). The Getz and Sulzberger Ice Shelves (to the lower left of the Antarctic maps) have seen 10 melt days this season, about double the average for this time of year. East Antarctic Ice Shelves—Fimbul, Roi Baudouin, and Amery—have had near-average to slightly above-average melting of 5 to 10 days each. 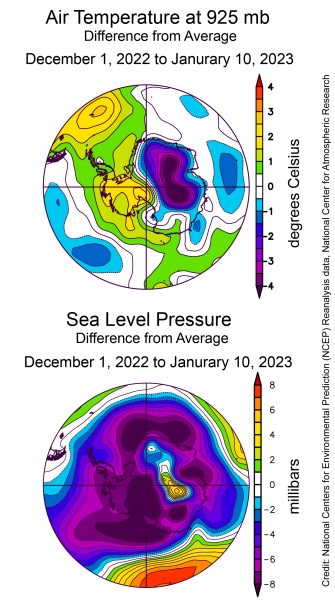 Air pressure was below average throughout most of the continent and adjacent Southern Ocean, with above-average pressures generally near 50 degrees South latitude. This creates stronger than average eastward-flowing winds around the continent, creating warm conditions in areas where the direction is southeastwards (i.e. the Peninsula), and in particular, causing strong foehn winds on the lee side (east side) of the Peninsula. Cool conditions in the high-altitude parts of East Antarctic are a result of strong circumpolar winds generally isolating this region from warmer air to the north. 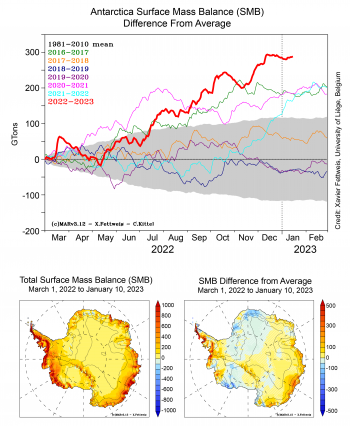 Figure 3. The top graph shows accumulated surface mass balance (total snowfall minus minor melt run off and snow evaporation) in billions of tons (Gtons) for the Antarctic continent from March 1, 2022, to January 10, 2023 (red line), along with several recent years, presented as a difference from the 1981 to 2010 average. The grey band is the standard deviation (66 percent of all years in 1981 to 2010 fall within the grey band). The bottom left map shows the total surface mass balance for the period. The bottom right map show SMB as a difference from average, shown in millimeters of water equivalent for the accumulated snow. These estimates are from the MARv3.12 model forced by the ERA5 reanalysis until December 2022 and by Global Forecast System (GFS) afterwards.

Snowfall over Antarctica has been significantly above average over these last weeks, continuing a trend that began in November 2021. Several recent hydrological years (March 1 to February 28) for Antarctica have had up to 200 billion tons more snow than average, but the 2022 to 2023 year has reached nearly 300 billion tons as of January 10, 2023. This is in line with some future projections that suggest larger accumulation with a warmer climate until warming reaches above 7.5 degrees Celsius (13.5 degrees Fahrenheit). This very high deviation from average snow input suggests that the Antarctic Ice Sheet could gain mass this year. Snowfall amounts have been especially high along the western edge of the Peninsula and the Bellingshausen coast, where persistent southeastward-flowing winds push marine air against a series of mountain ranges and the ice ridge along the spine of the Peninsula. However, the biggest contribution to the above average total snow input occurs in East Antarctica, and specifically Wilkes Land and the interior of Antarctica. Overall, high snowfall in Antarctica may completely offset recent net ice losses from faster ice flow off the ice sheet for this assessment period. Most of the past decade has seen annual net losses of 50 to 150 billion tons.

Melt ponds and glacier retreat in the Peninsula 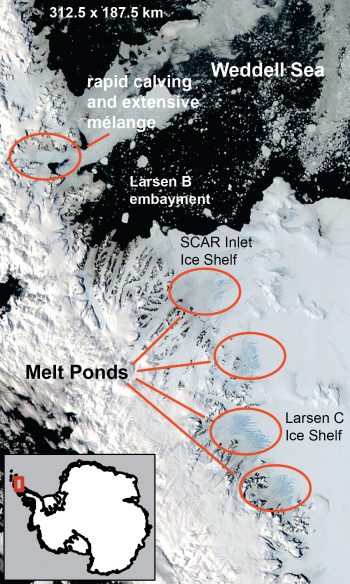 Figure 4. This true color image shows several melt ponds on the northern part of the Antarctic Peninsula (see inset map) on January 10, 2023. The image is from the Moderate-resolution Imaging Spectroradiometer (MODIS) sensor aboard the NASA Aqua satellite. For reference, North is towards the upper right, and the image is 312.5 by 187.5 kilometers in size (about 180 x 120 miles).

Above average surface melting over the northern Peninsula is evident in the accumulation of surface meltwater in several areas of the eastern side of the Peninsula. The Larsen C Ice Shelf, and the SCAR Inlet Ice Shelf, a remnant of the former Larsen B shelf, are all showing significant areas of accumulated meltwater on their surfaces. Meltwater on ice shelves can pose a threat to ice shelf stability through a process called hydrofracture, where water fills pre-existing cracks in the shelf and forces the crack to open further as water pressure increases inside the crack.

The warm conditions have also triggered several rapid tidewater-style retreats in the area this season, most noticeably for Hektoria/Green/Evans glacier system in the northwestern Larsen B embayment. The glacial ice front of Hektoria has retreated roughly 5 kilometers (3 miles) in the past two months. A similar outflow can be seen in the Moderate Resolution Imaging Spectroradiometer (MODIS) data to the north near the Sobral Peninsula from the Bombadier/Edgeworth/Dinsmore glacier system (not shown). The Seal Nunataks Ice Shelf remnant, which is between the Larsen A and Larsen B Ice Shelves, is also degrading since the sea ice minimum of early 2022.