The 2020 melt season in Greenland is over, finishing thirteenth for cumulative melt-day extent in the 42-year satellite record. Melt extent was greater than any year prior to 2002, with about 70 percent of the ice sheet experiencing some melting. Melting was moderately intense in the northeastern region but less so in the southwest, where in recent high-melt years the ice sheet has been losing mass and exposing bare ice. Much of the upper elevation areas of the ice sheet saw no melting this year. The balance between snow and rain input and melt runoff indicates a small net loss of ice this year. This does not include the imbalance caused by ice flow. 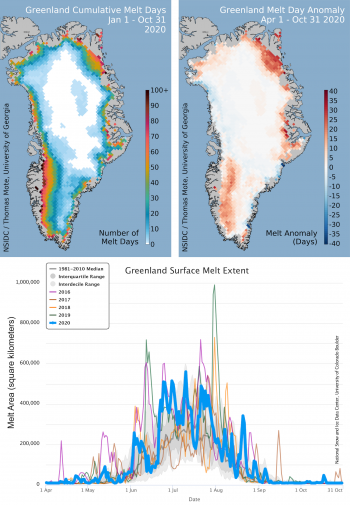 Figure 1. The top left map of the Greenland Ice Sheet shows the total number of surface melt days from January 1 through October 31, 2020. The top right map shows the difference between total 2020 melt days and the number of 1981 to 2010 average melt days from April 1 through October 31. The lower graph shows daily area in square kilometers of surface melting from April 1 to October 31, 2020, with daily melt extent trends for the preceding four years. 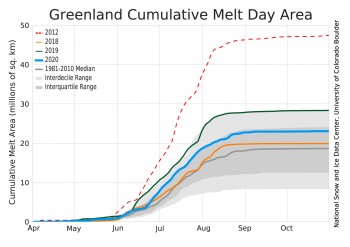 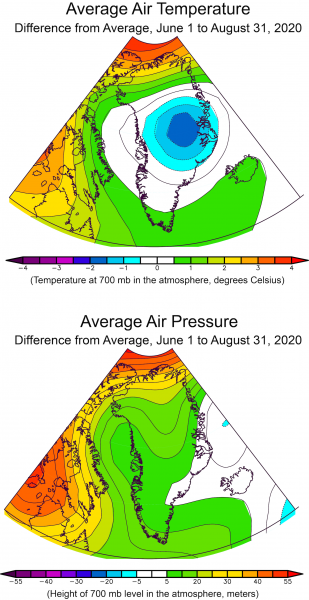 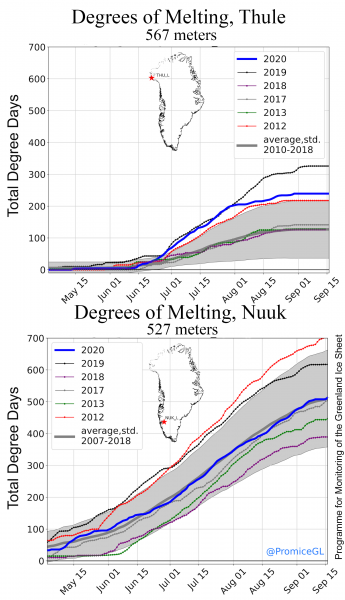 Figure 4. Cumulative degree days (the sum of the difference between the freezing point, 0 degrees Celsius, and the maximum temperature each day for the spring-summer melt season for two automatic weather stations in Greenland, at Nuuk (NUK_L) and Thule (THU_L).

Air temperatures above Greenland were generally near average over the summer months this year (Figure 3). Higher-than-average temperatures, with up to 3 degrees Celsius (5 degrees Fahrenheit) were limited to the far northern flank of the ice sheet, and significantly lower-than-average temperatures of 1.5 to 2 degrees Celsius (3 to 4 degrees Fahrenheit) near the Scoresby Sund in east-central Greenland. Though local surface winds can be quite high under certain conditions, air pressure patterns over the ice sheet indicated generally light regional winds that favored a westward to southwestward flow. Air off the far northern Atlantic Ocean in the Norwegian Sea swept in across the ice sheet. This pattern of temperature and pressure was remarkably consistent through all the individual months of June, July, and August.

A look at weather station data along Greenland’s west coast reflects the regional temperature trends (Figure 4). Nuuk, the capital of Greenland on the central southwestern coast, had summer temperatures very close to average for that region. Thule, near a large US military base in northwestern Greenland, had a much warmer than average summer, but was still cooler than Nuuk, which is nearly 1,500 kilometers (580 miles) to its south.

Greenland still on a diet 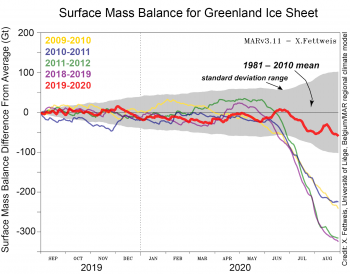 Figure 5a. This graph shows surface mass balance (SMB) for Greenland’s 2019 to 2020 autumn-winter-spring season (red line) relative to a 1981 to 2010 reference period. SMB is the sum of snowfall and rainfall minus any evaporation or runoff. Several recent high-melt years are shown for comparison. The estimates come from a model based on daily weather measurements. 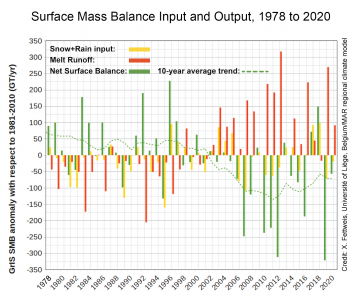 Figure 5b. This bar graph show net surface balance as a result of input vs output into the ice sheet for the 1978 to 2020 period based on reanalysis of weather data and snow-atmosphere model of process from MARv3.11. Net snow and rain input are shown in yellow, melt and evaporation loss in orange, and net surface balance in green. The 2020 season, which runs from September 1, 2019 to August 31, 2020 in this analysis, shows a net loss smaller than many recent years, but larger than most years in the previous century. The 10-year average line includes estimates from before 1978 on the left edge of the graph.

Net surface mass balance (SMB), which is the snow and rain input minus evaporation and melt runoff, was only slightly less than average at 314 billion tons, or 56 billion tons below the 1981 to 2010 average, according to the MARv3.11 climate model (Figure 5a). This can be compared to the major melt and ice loss years of 2012, 2019, and others in the last decade with values between 225 and 325 billion tons below average (Figure 5b). The 2020 regional pattern had low SMB all along the western side of the ice sheet but near average to slightly above average along most of the eastern coastal areas.

Greenland’s glaciers: more to their change than just faster flow 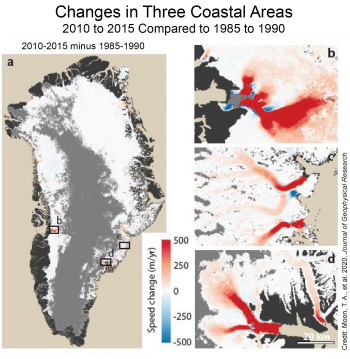 Figure 6. (a) White and colored areas show the extent of the region where early ice flow maps (1985-1990) can be compared with images acquired up to 30 years later. Observations around the ice sheet margin (b-d) show new details about how the ice sheet is responding (faster flow in red, slower in blue). Responses include narrowing of fast flow regions, rerouting of ice flow, and abandonment of some glacier outlets.

With a growing record of satellite imagery and advances in image processing, scientists are now able to better explore the changes to Greenland’s coastal area in the last three decades. A new paper by our colleagues Twila Moon, Alex Gardner, Bea Csatho, Ivan Parmuzin, and Mark Fahnestock analyzes how ice outflow speed and surface melting have increased. Every year since 1998, the ice sheet has overall lost ice. Satellite sensor improvements, such as on Landsat 7 and 8, and improvements in image processing for ice flow mapping (see ITS_LIVE) have created an improved set of maps for documenting changes in Greenland’s ice outflow. These maps reveal substantial reconfigurations of several major glaciers (Figure 6). For many fast-flowing glaciers, the research team found that the central channel of fast flow has sped up, but the edges of the channel have slowed, effectively narrowing the width of the fast flow area. Researchers also see evidence for ice flow rerouting and even abandonment of some glacier outlets. While thinning ice and retreats from the ice edge change the ice sheet, the shape of the land beneath the ice remains mostly unchanged. In some areas the ice cannot flow over the landscape via the historical pathways. This reconfiguration of the ice sheet has important implications for other elements of the Greenland system, such as the flow of water beneath the ice sheet, and the movement of sediment and nutrients into the fjords. The new data collected by ITS_LIVE are allowing researchers to characterize and understand what rapid deglaciation looks like on scales that matter for wildlife, fisheries, infrastructure, and communities.