Surface melting on the Northern Hemisphere’s largest mass of ice began during the second week of April, with several significant melting episodes at the end of the month and into early May. Warm conditions over the ice sheet and winds from the east were prevalent for the two-month period. While significant, and above average for the 1981 to 2010 reference period, the melting extent has been comparable to previous years spanning 2010 to 2018. 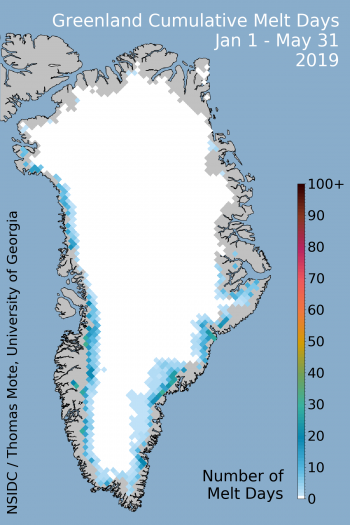 Figure 1. This map shows the cumulative melt days for the 2019 melt season through May 31, 2019. Data are from the MEaSUREs Greenland Surface Melt Daily 25km EASE-Grid 2.0 data set. About the data 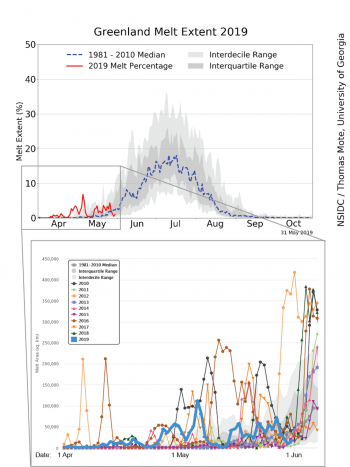 The number of surface melting days was well above the 1981 to 2010 average for the beginning of the 2019 Greenland melt season, particularly along the southeastern coast. Surface melting was detected up to 26 out of the 61 days between April 1 to May 31. A narrow band of melting was also present along the western coast, from the southern tip of Greenland to the region around Thule in the northwest, exceeding 20 days in some locations. This represents an early onset, but not an unprecedented extent or intensity relative to recent years.

On May 6, melt extent was the highest observed for that day in the 40-year satellite record by a small margin. However, greater melt events—both earlier and later than May 6—have been observed in the past. The May 6 event extended over the southeastern flank of the ice sheet.

More extensive melt periods were seen from mid- to late April and again in early May when clouds bringing warm air and moisture blanketed the southeastern coast. This was attributed to low pressure in the Irminger Sea, between Iceland and Greenland, driving air from the east and south onto the steeply sloping ice sheet, resulting in snowfall and sometimes rain. 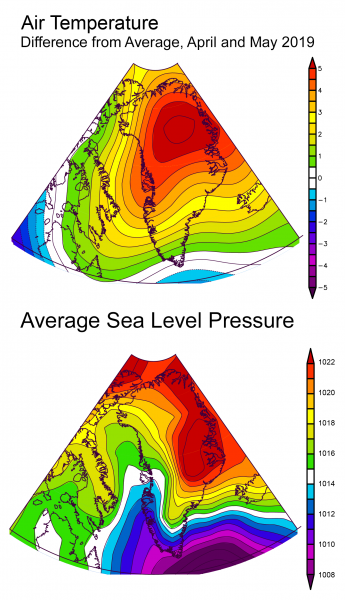 Figure 4. The top plot shows the departure from average air temperature over Greenland at the 700 hPa level, or about 10,000 feet above sea level, for April and May 2019 as compared to the 1981 to 2010 average. The bottom plot shows average sea level pressure (estimated over land areas) for the same period. 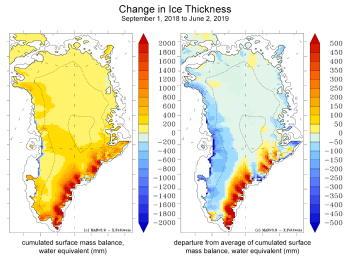 Figure 5. These maps are the result of a climate model simulating surface mass balance (SMB) departure from average for Greenland up to June 2, 2019. SMB is the net sum of snowfall and rainfall, minus any evaporation or runoff. The reference period is 1981 to 2010.

It was unusually warm over nearly the entire ice sheet relative to the 1981 to 2010 reference, notably over the northern half of the island, where temperatures were more than 4 degrees Celsius (7 degrees Fahrenheit) above average. Over most of the island, this still means conditions were well below freezing, but along the western coast and southeastern coast, temperatures rose to the melting point frequently. Sea level pressure was higher than average along the northeastern coast, with low pressure centered (on average for the two months) off the southeastern tip of the island, and southwest of Iceland. This set up a pattern of winds blowing from the east, off the ocean, and supported significant water vapor transport and large snow accumulations. Winds from the east are not unusual for this region, and tend to bring warm and snowy conditions, and sometimes rain.

Snowfall and surface mass balance, or the combination of snow and rain, minus any evaporation or runoff, are near average, recovering from a relatively dry winter. This recovery is related to a strong influx of moisture-carrying air from the south and east of Greenland to its southeastern coast. However, the recovery is limited to that area, and the rest of Greenland to the north and west are well behind their typical snowfall totals for this time of year. Notably, some net runoff (ice loss for the ice sheet) has already begun along the central western coast resulting from the early onset of the melt season and the low winter snowfall. 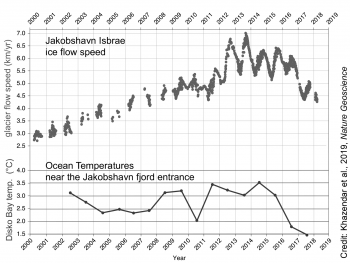 Figure 6. The top graph shows ice flow speed for a point near the front of Jakobshavn Isbrae, the largest glacier in Greenland, derived from a number of satellite data sets. The bottom graph shows ocean temperatures from 250 meters depth (about 825 feet below the surface) measured in Disko Bay, located just in front of the glacier fjord. Jakobshavn Isbrae is near the center of the western coast of Greenland.

A recent paper documents that Greenland’s largest glacier, Jakobshavn Isbrae, has slowed dramatically in recent years in response to cooling of ocean temperatures in the waters near the coast. The study uses ice flows determined from satellite spanning 19 years (2000 to 2018) and ocean temperature from a number of measurements over that time. Ice flow speeds in the selected location peaked at 7 kilometers per year (4.3 miles per year) in late 2013, and slowed thereafter to a summertime peak of just 5 kilometers per year (3.1 miles per year) in 2017. At the same time, ocean temperatures in a deep bay near the glacier fjord entrance dropped dramatically, from 3.5 degrees Celsius (38.3 degrees Fahrenheit) to 1.5 degrees Celsius (34.7 degrees Fahrenheit) as a cool pulse of water displaced warmer water that had previously persisted in the area. The authors of the study pointed out that, while it may appear that ice loss from the ice sheet is slowing, their results merely show how critical the interaction is between deep glacier ice and warm ocean water, and that it is inevitable, given a generally warming ocean, that rapid ice loss will again occur. However, the slowdown of ice flow at Jakobshavn Isbrae (and for other glaciers) for the past two years may imply slowing of mass loss, which may persist for several more years. 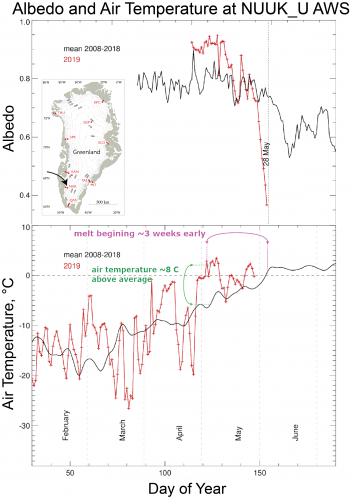 Figure 7. The top graph shows weather and snow measurements for a site on the Greenland Ice Sheet east of the coastal city of Nuuk (NUUK_U, 72.39 degrees North, 27.26 degrees West, 988 meters or 3,240 feet elevation). The top graph illustrates how a drop in snow reflectance (albedo) coincided with early melting in May 2019, as air temperatures surged above freezing. Both graphs show the average conditions for albedo and air temperature for the preceding 11 years.

Low snowfall over western Greenland, combined with the early warming, has resulted in an early onset of the melt season at several automated weather stations (AWS) managed by Programme for Monitoring of the Greenland Ice Sheet (PROMICE), a Danish ice and climate research site. The stations have been maintained for the past 12 years, providing a record that permits comparison of 2019 to the recent past. Colleague Jason Box of the Danish Geological Survey produced these graphics and has also compiled a video on current conditions in Greenland and the likelihood of an extensive melt year in 2019.