Three major melt events during late July and August brought the 2018 Greenland melt season to a close. Overall, conditions on the ice sheet were slightly warmer than average for the second half of the summer. From October 2017 to September 2018, continued heavy snowfall on the southeastern coast resulted in near-record snow mass added to the ice sheet. 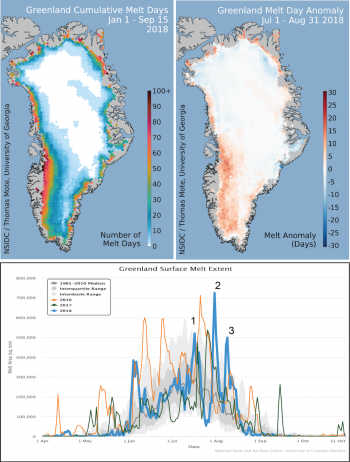 Figure 1. The top maps show the cumulative melt days for the 2018 melt season through September 15, upper left, and the difference from the average, upper right, for July and August combined, as referenced to the 1981 to 2010 period. Below is a plot of daily melt area for the 2018 season through September 15, compared with melt extents for 2017, 2016, and the 1981 to 2010 period. The three warm periods of increased melt in July and August 2018 are labelled. Data courtesy of Thomas Mote, University of Georgia. About the data

Figure 2. This graph shows the cumulative melt area (the running sum of the daily area experiencing melt) in millions of square kilometers for 2018 through September 15, 2017, 2016, and the 1981 to 2010 reference period. The graph shows the pace of melting for the respective periods, and a brief increase in cumulative area growth during the three warm spikes in melt area. About the data

In July and August, the number of surface melt days was above average along the southwestern coast, reaching well up into the ice sheet. Surface melt was below average in the northwestern and northeastern areas of the ice sheet, but melting in the southeast increased after the early season. 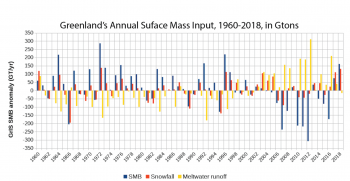 Figure 3. This chart shows the model results for the Greenland Ice Sheet snowfall and melt runoff since 1960. The model (MAR 3.9) was run using input from National Centers for Environmental Prediction (NCEP) weather reanalysis data. The surface mass balance (SMB) refers to the net difference between snowfall input and meltwater runoff, or evaporation, loss. The bars show the relative difference from the 1981 to 2010 reference period of observations and modeling.

As noted in the previous post, exceptional winter snow accumulation and heavy, summer snowfall, drove the net snow input mass to 130 billion tons above the 1981 to 2010 average. This was followed by a near-average melt and runoff period, resulting in a large net mass gain for the ice sheet in 2018 of 150 billion tons. This is the largest net gain from snowfall since 1996, and the highest snowfall since 1972. However, several major glaciers now flow significantly faster than in these earlier years. The net change in mass of the ice sheet overall, including this higher discharge of ice directly into the ocean, is not clear at this point but may be a smaller loss or even a small gain. This is similar to our assessment for 2017, and in sharp contrast to the conditions for the preceding decade.

Persistent winds from the northeast triggered high snowfall for 2017 to 2018 along the eastern Greenland coast. These winds blew across open ocean areas allowing the atmosphere to entrain moisture and deposit it as heavy snowfall on the ice sheet. 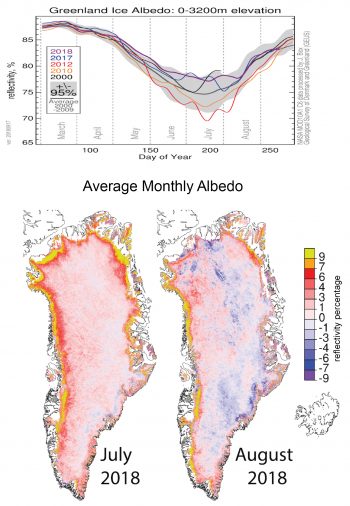 High winter and spring snowfall, and a moderate initial pace of melting, resulted in a more reflective (higher albedo) surface for the ice sheet than in past summers. Since bright, fresh snow blanketed areas that were once darker, such as dirty snow or bare ice, July’s average albedo for the ice sheet was 5 to 9 percent above the 2000 to 2009 reference period.

Wet snow also has a darker surface, or lower albedo. Increased surface melting, above-average temperatures, and the three spikes in melting, August’s albedo decreased to more average values. However, the albedo along the western coast remained above average.

The annual publication of the Arctic Report Card is expected in December, which will include more details of all aspects of the 2017 to 2018 period for Greenland’s climate and ice sheet.