On September 13, Arctic sea ice appears to have reached its seasonal minimum extent of 4.64 million square kilometers (1.79 million square miles), the eighth lowest in the 38-year satellite record. The overall rate of ice loss this summer was slowed by a persistent pattern of low sea level pressure focused over the central Arctic Ocean. 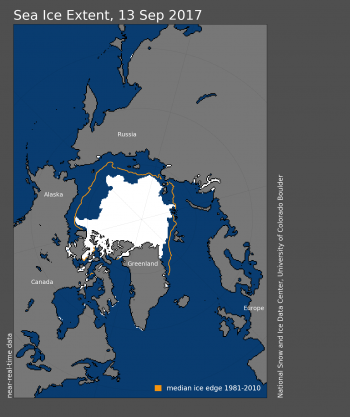 Figure 1. Arctic sea ice extent for September 13, 2017 was 4.64 million square kilometers (1.79 million square miles), the eighth lowest in the satellite record. The orange line shows the 1981 to 2010 average extent for that day. Sea Ice Index data. About the data

During the first two weeks of September, the ice edge continued to retreat in the Chukchi, East Siberian, and Kara Seas, whereas it slightly expanded in the Beaufort and Laptev Seas. The ice edge remains far to the north of its average position in the Chukchi Sea. The Northern Sea Route is largely open; Amundsen’s Northwest Passage (the southern route) has up to 50 percent ice cover in some places, though as noted in our last post, ships have successfully navigated through the southern route with icebreaker assistance. The northern Northwest Passage route, entered from the west via McClure Strait, remains choked by consolidated, thick, multi-year ice. 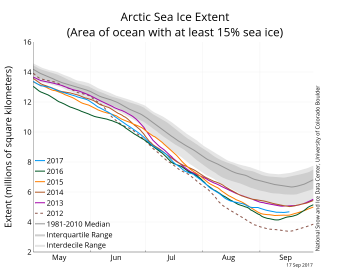 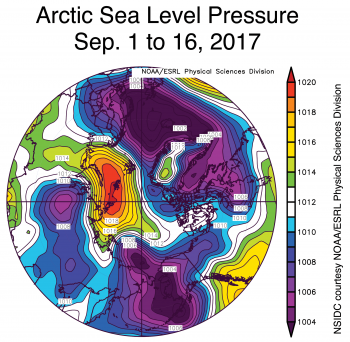 Figure 2b. This image shows average sea level pressure over the Arctic Ocean for the period of September 1 to 16, 2017.

The date of the minimum ice extent for 2017 was two days earlier than the average minimum date of September 15. The earliest annual sea ice minimum in the satellite record occurred on September 5 in the years 1980 and 1987, and the latest on September 23, 1997.

As is typical of this time of year when the solar radiation received at the surface is quickly waning, the rate of ice loss slowed during the first half of September. Ice retreat from the beginning of September until the minimum averaged 25,300 square kilometers (9,770 square miles) per day, slightly faster than the 1981 to 2010 average for the same period of 22,800 square kilometers (8,800 square miles) per day.

Effects of seasonal ice retreat in the Beaufort and Chukchi Seas 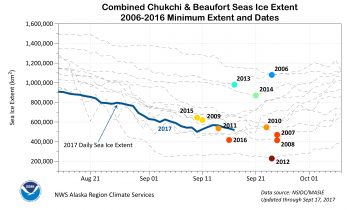 Figure 3. This chart shows combined sea ice extent in the Chukchi and Beaufort Seas from August 15 to October 7 for the years 2006 to 2016, including the extent so far for 2017. The colored dots show the day the minimum occurred in the region during a specific year. Data are from the Multisensor Analyzed Sea Ice Extent (MASIE) product.

According to a report by the Alaska Dispatch News, the lack of sea ice forced walruses to the shore of Alaska’s Chukchi Sea earlier than any time on record. The lack of ice also forced biologists monitoring Alaska polar bears to cut short their spring field season. In turn, the NOAA National Weather Service Climate Prediction Center states that because of the extensive open water, air temperatures over the Beaufort and Chukchi Seas and along the North Slope of Alaska will likely be far above average through this autumn.

Rick Thoman of the National Weather Service in Fairbanks, Alaska compiled an analysis of the combined Chukchi and Beaufort Seas ice extent from the Multisensor Analyzed Sea Ice Extent (MASIE) product. MASIE is based on operational ice analyses at the U.S. National Ice Center and is archived and distributed by NSIDC. It shows that 2017 tracked near record lows for the region through much of the summer, but after mid-August the pace of ice loss slowed relative to recent years. While it appears unlikely that extent in the Beaufort and Chukchi Seas will reach a record low (set in 2012), it will still be among the four or five lowest in the MASIE record (Figure 3). Note that the range in dates for the minimum extent in the region differs from those for the Arctic as a whole and tend to be later, ranging from September 10 in 2015 to September 25 in 2007 and 2008. In other words, the Chukchi and Beaufort Seas may continue to lose ice even after the overall Arctic minimum extent is reached. From the passive microwave data (not shown), the Chukchi/Beaufort minimum has occurred as early as August 14 in 1980 to as late as October 2 in 1991. 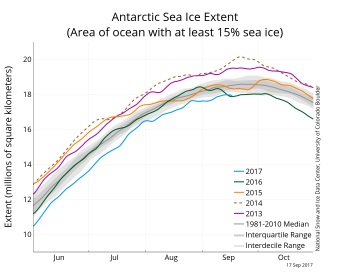 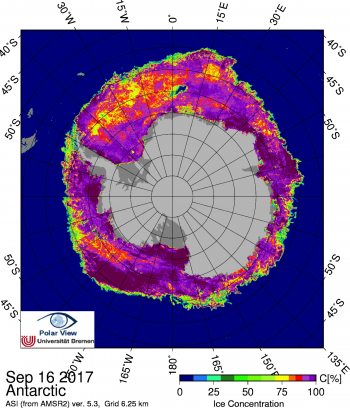 Figure 4b: This map shows Antarctic sea ice concentration on September 16, 2017. Note the Maud Rise polynya at the top of the image. Data are from the Advanced Microwave Scannig Radiometer 2 (AMSR2).

Between September 9 and September 17 of 2016, Antarctic sea ice lost nearly 100,000 square kilometers (38,600 square miles) of sea ice per day, and sea ice extent moved from near-average to a near-record-daily low by September 17. For the next 12 months Antarctic sea ice remained extremely low. Record low ice extents were set every day from November 5, 2016 to April 10, 2017. Extents averaged for November and December of 2016 were five standard deviations below average. No other 12-month period (September 2016 to August 2017) has had such persistently low sea ice extent. The year 1986 had near-record low extent for the winter period (June to December), but there were periods of near-average and even above-average ice extent earlier in the calendar year.

Beginning around September 2, an opening in the Antarctic sea ice pack formed north of Dronning Maud Land in the easternmost Weddell Sea (near 64°S, 5°E). By mid-September, this opening, or polynya, had grown to about 12,000 square kilometers (4,600 square miles). This feature has been observed intermittently in the Antarctic pack ice since the first satellite data became available in the 1970s. In 1974, 1975, and 1976, the polynya was much larger, averaging 250,000 square kilometers (96,500 square miles). It was absent for many years in the 1980s and 1990s. In recent years the feature has been observed sporadically and has been much smaller.

The polynya is formed when ocean currents uplift deep warm ocean water to the surface where it melts the sea ice. An oceanic plateau called the Maud Rise is responsible for forcing the vertical movement of the water. The persistence of certain atmospheric patterns, such as the southern annular mode, or SAM, is thought to play a role in driving the deep water layer against the Maud Rise.

See the NASA animation of Arctic sea ice extent from the beginning of the melt season on March 8, 2017 to the day of the annual minimum on September 13, 2017 here.

In Table 1, years 2014 and 2013 were both ranked ninth lowest. They should have been ninth and tenth respectively. This has been corrected.