August saw a remarkably steady decline in Arctic sea ice extent, at a rate slightly faster than the long-term average. Forecasts show that this year’s minimum sea ice extent, which typically occurs in mid to late September, is likely to be the third or fourth lowest in the satellite record. All four of the lowest extents have occurred since 2007. In mid-August, Antarctic sea ice extent began to trend below the 1981 to 2010 average for the first time since November 2011. 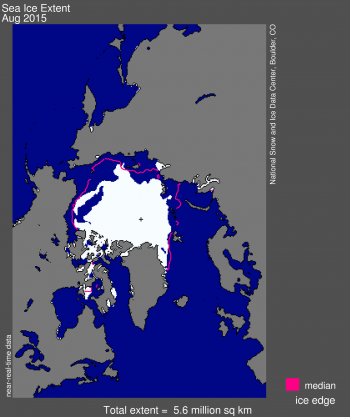 The rapid pace of daily ice loss seen in late July 2015 slowed somewhat in August. The pace increased slightly toward the end of the month, so that by August 31 Arctic sea ice extent was only slightly greater than on the same date in 2007 and 2011. The ice is currently tracking lower than two standard deviations below the 1981 to 2010 long-term average.

Sea ice extent remains below average in nearly every sector except for Baffin Bay and Hudson Bay, where some ice persists in sheltered coastal areas. A striking feature of the late 2015 melt season are the extensive regions of low-concentration ice (less than 70% ice cover) in the Beaufort Sea. A few patches of multi-year sea ice surrounded by open water remain in the central Beaufort Sea. 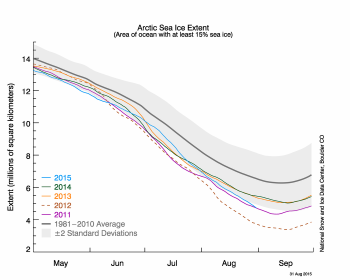 Cool conditions prevailed in the East Siberian, Chukchi, and western Beaufort seas, where air temperatures at the 925 millibar level were 1.5 to 2.5 degrees Celsius (3 to 5 degrees Fahrenheit) below average. However, a broad region of higher-than-average temperatures extended from Norway to the North Pole, 1.5 to 2.5 degrees Celsius (3 to 5 degrees Fahrenheit) above average. Sea level pressures were up to 10 millibars above average over the central Arctic Ocean, paired with slightly below average values in north-central Siberia, similar to the dipole-like pattern seen for July. The Arctic Oscillation was in its negative phase for most of the month, again similar to July. 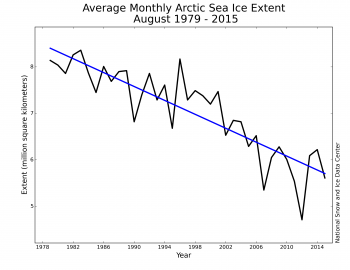 Arctic sea ice extent averaged for August 2015 was the fourth lowest in the satellite data record. Through 2015, the linear rate of decline for August extent is 10.3% per decade. 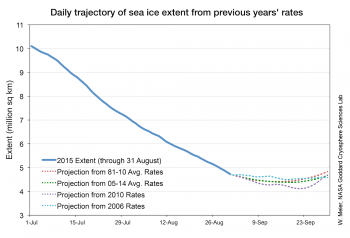 Figure 4. The graph shows ice extent forecasts, based on ice extent as observed on August 31, 2015 and past years’ observed rates for selected years.

One way of estimating the upcoming seasonal minimum in ice extent is to extrapolate from the current extent, using previous years’ rates of daily sea ice loss. Assuming that past years’ daily rates of change indicate the range of ice loss that can be expected this year, this method gives an envelope of possible minimum extents for the September seasonal minimum. However, it is possible to have unprecedented loss rates, either slow or fast.

The forecast places the upcoming daily sea ice minimum between third and fourth lowest, with fourth more likely. There is still a possibility that 2015 extent will be lower than 4.3 million square kilometers, the third lowest sea ice extent, surpassing the 2011 sea ice extent minimum, and a small chance of surpassing 2007, resulting in the second-lowest daily minimum. This assumes that we continue to have sea ice loss rates at least as fast as those of 2010. This was indeed the case for the final ten days of August 2015.

Figure 5. Click on the image to view an animation of sea ice concentration north of Canada for August 23 to September 1, 2015.

The southerly route through the Northwest Passage is open. The passage was discovered during 1903 to 1906 by Roald Amundsen, who made the first transit of the passage from Baffin Bay to the Beaufort Sea. This route passes south of Prince of Wales Island and Victoria Island before entering the Beaufort Sea south of Banks Island. Data from the AMSR-2 satellite, which uses passive microwave emission, suggests that this path is ice-free. The higher-resolution Multisensor Analyzed Sea Ice Extent (MASIE) product, based on several data sources and human interpretation, shows only a few areas of low-concentration ice. The broader and deeper passage through the Canadian Arctic Archipelago, between Lancaster Sound, Parry Channel, and McClure Strait, is still obstructed by ice, but at the end of August ice blocked only a short portion near Victoria Island. Before drawing conclusions about navigability, however, it is important to check with the operational services such as the National Ice Center (NIC) or the Canadian Ice Service (CIS). The Northern Sea Route, north of the European Russian and Siberian coasts, has remained largely clear of ice for the entire month.

Warm surface water near Alaska and the Kara Sea 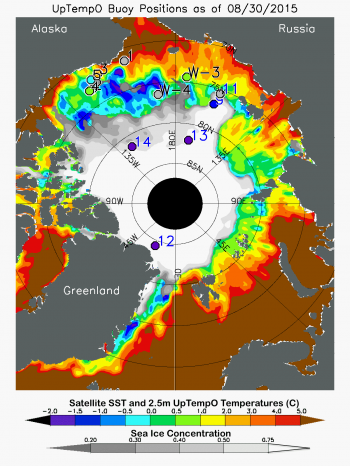 Strong winds from the east in spring of this year opened the ice pack in the eastern Beaufort Sea quite early, allowing early warming of the ocean surface. However, the winds shifted in later spring, forcing the warmed water layer against the North American mainland rather than dispersing it further into the Arctic Ocean. Sea surface temperatures (SSTs) were high as of late August 2015 in the Beaufort, Chukchi, and Laptev Seas, as well as in Baffin Bay and the Kara and northern Barents seas.

The remaining area of low concentration ice in the Beaufort Sea has large pockets of warming open water. This area is likely to melt out by the September ice minimum; however, maximum SSTs in this region will probably not be especially high (currently about 2.5 degrees Celsius, or 5 degrees Fahrenheit above the freezing point of seawater) owing to how late we are in the melt season. 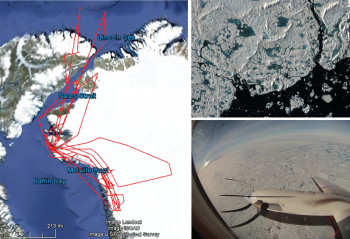 Figure 7. The map at left shows flight tracks flown by NASA to evaluate laser reflection characteristics over sea ice and land ice. The image at top right shows sea ice with melt ponds in the Lincoln Sea. The photo at bottom right shows the view from the aircraft window of moderately loose pack in the area.

In support of the upcoming Ice, Cloud, and land Elevation Satellite-2 (ICESat-2) mission, NASA recently deployed two instrumented aircraft to Thule Air Force Base, Greenland (near Qaanaaq) to collect data for the development of software to process the satellite data. Instrumentation for the three-week campaign (July 28 to August 19) included a laser altimeter called SIMPL and an imaging spectrometer called AVIRIS-NG. ICESat-2 is a satellite-borne laser altimetry mission that uses a new approach to space-borne determination of surface elevation, based on a high measurement rate (10,000 times per second), multiple ground tracks of laser data, and closely spaced orbital tracks to provide more detailed mapping. Specific science goals of the airborne campaign include assessing how melting ice surfaces and snow-grain-size variability affect the surface return of green-wavelength light (the color of the ICESat-2 lasers).

Over sea ice, the aircraft data provide important information on sea ice freeboard (height of flotation) and snow cover on sea ice. Both are important parameters for correcting satellite measurements of sea ice thickness. Of the more than thirty-five science flight hours of data collected based out of Thule, four flights targeted sea ice in the vicinity of Nares Strait, where loose pack ice, covered in surface melt ponds, was found. These data will be available on the NASA ICESat-2 Web site later in the year.