Arctic sea ice declined slowly through most of April. Because of the slow decline in April, ice extent for the month as a whole did not approach record lows, as it did in March. However, ice extent began to decline more quickly towards the end of the month.

Central Russia saw an early retreat of snow cover, as a result of prevailing warm conditions during the past winter over the eastern Arctic and Siberia.

Ice extent was lower than average in much of the northern North Atlantic, including the Barents Sea and Greenland Sea, and in the Canadian Maritime regions and Sea of Okhotsk. Only scattered areas in the Bering Sea and Baffin Bay had more extensive sea ice than average for this time of year. 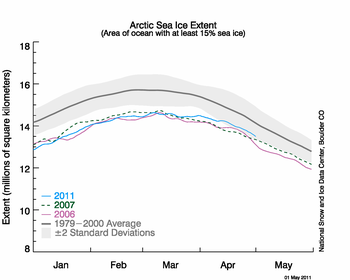 Figure 2. The graph above shows daily Arctic sea ice extent as of May 1, 2011, along with daily ice extents for previous low-ice-extent years in the month of April. Light blue indicates 2011, dashed green shows 2007, pink indicates 2006, and dark gray shows the 1979 to 2000 average. The gray area around the average line shows the two standard deviation range of the data. Sea Ice Index data.—Credit: National Snow and Ice Data Center
High-resolution image

Cool conditions helped retain ice in Baffin Bay, between Canada and Greenland. Most of the ice loss during April was in the Kara Sea, north of Siberia, and the northern Baltic Sea in Europe. Ice also retreated rapidly in the western Bering Sea and the Sea of Okhotsk.

Towards the end of April, ice loss accelerated in the eastern Arctic as temperatures warmed there, leading to the formation of open water areas, or polynyas, near Franz Joseph Land and along the coast in the Kara Sea. Open water also started to form in Hudson Bay and Hudson Strait. 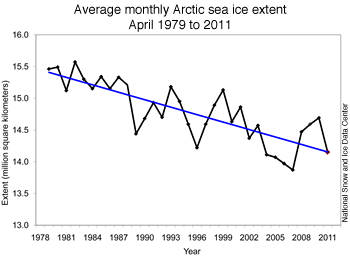 April 2011 compared to past years

April 2011 continued the overall downward trend of the past thirty years, ranking fifth lowest in the satellite record. The two lowest years for April were 2007 and 2006. 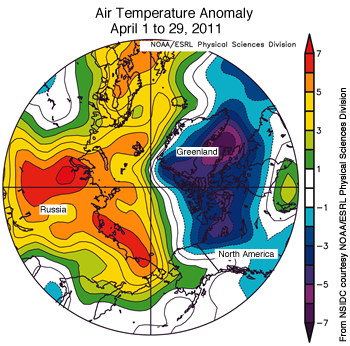 For most of April, nearly all of the eastern Arctic, north of Europe and Russia, remained warmer than average. The largest anomalies were over central Russia, northern Siberia and the Laptev and East Siberian Seas, where temperatures averaged over the month were approximately 6 degrees Celsius (11 degrees Fahrenheit) above average. In contrast, most of the western Arctic was cooler than normal, with temperatures 6 degrees Celsius (11 degrees Fahrenheit) cooler than average over Davis Strait and Baffin Bay.

The eastern Arctic remained warmer than average all winter. This suggests that that sea ice there did not thicken as much as in past winters, and may retreat rapidly as the summer melt season progresses. University of Washington’s Pan-Arctic Ice Ocean Modeling and Assimilation System (PIOMAS) model of sea ice volume reflects this, showing continued very low ice mass in the Arctic compared to previous decades.

Meanwhile, the atmospheric circulation for April was characterized by a strong positive phase of the Arctic Oscillation (AO), with unusually low sea level pressure over much of the Arctic Ocean, and the lowest pressures between Greenland and Iceland. This pattern helped to draw warm air into the eastern Arctic. How this will affect observed sea ice conditions at the end of this summer remains to be seen. 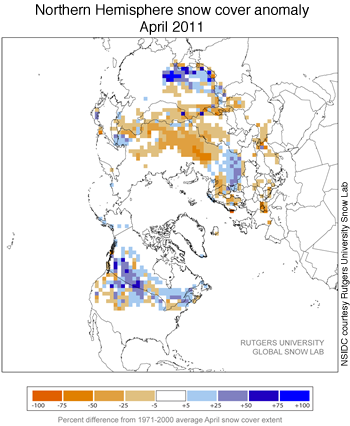 Warm conditions in central Russia, linked to the positive phase of the Arctic Oscillation, promoted an early retreat of snow cover in a broad band stretching from the Urals to far eastern Siberia. However, in North America several late snowstorms led to higher-than-average monthly snow extents in the northern Plains states and western Canadian provinces. Greater-than-average snowcover was seen in the Tibetan plateau and east of the Urals.