Arctic sea ice extent for the month of March 2011 was the second lowest in the satellite record. Sea ice reached its maximum extent on March 7; extent on this date tied for the lowest winter maximum extent in the satellite record. Air temperatures over most of the Arctic Ocean were above normal. New data on ice age shows that the amount of older, thicker ice has increased slightly over last year. 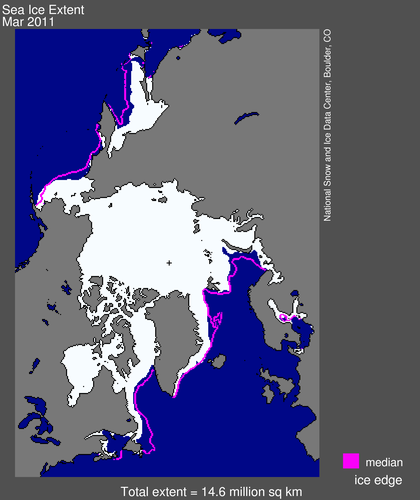 Arctic sea ice extent averaged over the month of March 2011 was 14.56 million square kilometers (5.62 million square miles). This is the second-lowest March extent on record, after 2006.

In March, ice extent remained below normal in both the Atlantic and Pacific sectors of the Arctic, particularly in the Labrador Sea and the Gulf of St. Lawrence. 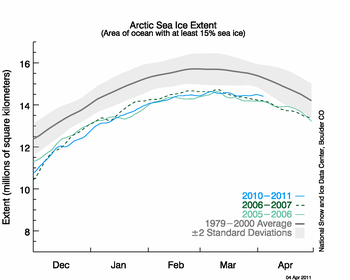 Ice extent showed little change through the month of March, as is typical this time of year. The ice reached its winter maximum extent on March 7, and over the next few weeks, ice extent declined only slightly. New ice was still growing in some areas, but it was melting in others. Overall, the ice changes in these regions canceled each other out.

Late in the month, extent again increased, though not above the previously reported level of March 7. This late increase is due mainly to increases of extent in the Kara, Barents, and Greenland Seas. The Greenland Sea increase is likely due primarily to ice that was exported from the Arctic Ocean to the Greenland Sea by winds and ocean currents, though some ice growth is also apparent. The increase in the Kara and Barents Seas appears primarily due to ice growth resulting from unusually cold weather in the region. 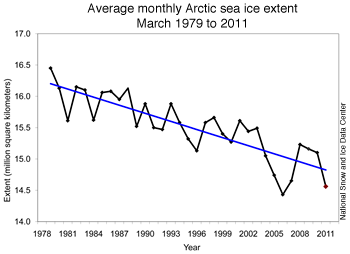 March 2011 compared to past years

March 2011 had the second-lowest ice extent for the month in the satellite record, after 2006. Including 2011, the March trend in sea ice extent is now at -2.7 percent per decade. 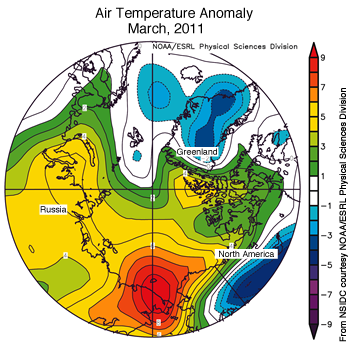 Air temperatures over almost all of the Arctic Ocean were above average, reaching 7 to 9 degrees Celsius (13 to 16 degrees Fahrenheit) above average over the Chukchi Sea. Below-average temperatures were found over Greenland, the Norwegian Sea and part of Canada.

Atmospheric circulation for March was dominated by a broad low-pressure area, centered over the northern Barents Sea. Winds associated with this pattern drew warm, southerly air into the Chukchi Sea region.

As in February, the Arctic Oscillation (AO) mainly stayed in its positive phase, which tends to bring lower-than-average pressure over much of the Arctic, and higher-than-normal pressure in middle latitudes. For more information on current AO conditions, visit the NOAA Climate Prediction Center Web page. 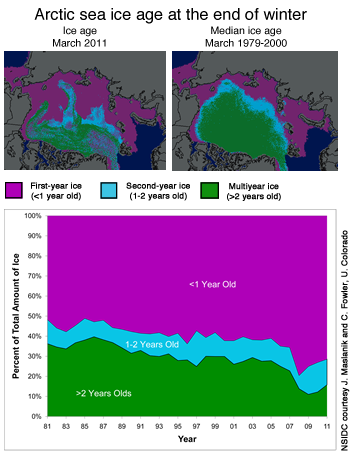 Figure 5. These images show ice age during the third week of March, for 2011 and averaged over the reference period of 1979 to 2000. The bottom figure shows ice age as a percentage of total ice in the Arctic.
—Credit: NSIDC courtesy J. Maslanik and C. Fowler, University of ColoradoHigh-resolution image

Every year at the start of the melt season, scientists look at sea ice age, using data from satellites and buoys. Older ice that has survived several summer melt seasons tends to be thicker, while newer ice is thinner and more vulnerable to melt in summer. Over the past several decades, the spring ice cover has become increasingly dominated by younger and generally thinner ice, because of strong summer melting in recent years that has reduced the amount of ice surviving into winter.

This year the older, thicker ice has increased somewhat over last year, although it remains younger than the 1979 to 2000 average ice age. Data through the third week of March shows an increase in sea ice one to two years old, and older than two years old, compared to recent years. However, the amount of older ice remains much lower than in the mid-1980s, and there is still almost none of the oldest ice, older than four years old, that used to dominate much of the Arctic Ocean.

The distribution of old and young ice at the end of March 2011 also looks different than the standard comparison period of 1981 to 2000. Winds and ocean currents this winter resulted in an unusual tongue of old ice extending from north of the Canadian Arctic Archipelago into the Beaufort and Chukchi Seas, in a region that used to be dominated by old ice that usually survived the summer melt season. A similar tongue of old ice appeared in March 2010, which almost completely melted away during the summer of 2010. Whether the tongue of old ice seen this spring melts away this summer will depend largely on ocean temperature and the weather patterns that set up over the next six months.

Note: James Maslanik and colleagues recently recalculated their entire series of ice age data based on a minimum of 15% concentration. The old version used a 40% minimum. The reprocessed ice age data is therefore more consistent with other measures of sea ice, including NSIDC sea ice extent data, which use a threshold of 15%.