Arctic sea ice grew more slowly than average in November, leading to the second-lowest ice extent for the month. At the end of November, Hudson Bay was still nearly ice-free. 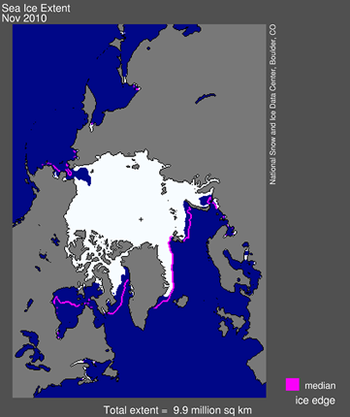 Ice extent was unusually low in both the Atlantic and Pacific sectors of the Arctic and in Hudson Bay. Typically by the end of November, nearly half of Hudson Bay has iced over. But on November 30, only 17% of the bay was covered by sea ice. Compared to the 1979 to 2000 average, the ice extent was 12.4% below average for the Arctic as a whole. 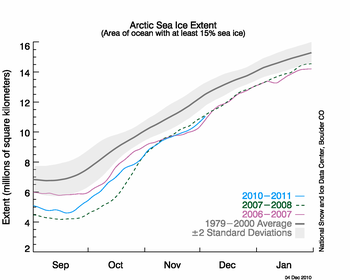 Figure 2. The graph above shows daily Arctic sea ice extent as of December 4, 2010, along with daily ice extents for previous low-ice-extent years in the month of November. Light blue indicates 2010, pink shows 2006 (the record low for the month) and dark gray shows the 1979 to 2000 average. The gray area around the average line shows the two standard deviation range of the data. Sea Ice Index data.—Credit: National Snow and Ice Data Center
High-resolution image

As temperatures drop in autumn, open water areas on the Arctic coastal seas quickly refreeze. After this rapid increase in ice extent during October, ice growth slows in November. This November, ice extent over the entire Arctic grew at an average rate of 74,000 square kilometers per day (28,600 miles per day), which is slower than average. However, local weather conditions kept ice extent very low in some locations, contributing to the low extent for the month.

Near-surface air temperatures over the Siberian and Alaskan side of the Arctic were 3 to 5 degrees Celsius (5 to 9 degrees Fahrenheit) warmer than normal in November. Air temperatures over Baffin Bay were also unusually warm (8 degrees Celsius, or 14 degrees Fahrenheit above average). The warm air came from two sources: unfrozen areas of the ocean continued to release heat to the atmosphere; and a circulation pattern brought warm air into the Arctic from the south. 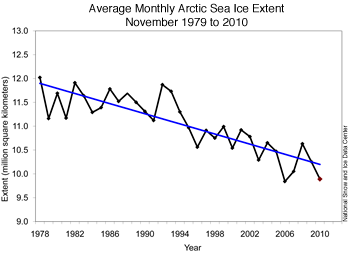 November 2010 compared to past years

November 2010 had the second-lowest ice extent for the month since the beginning of satellite records. The linear rate of decline for the month is –4.7 % per decade. 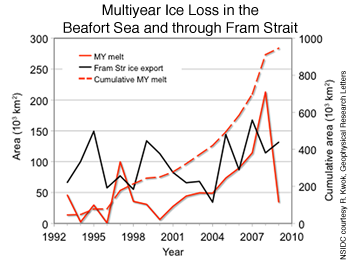 The loss of multiyear ice has contributed to low summer ice extents in recent years, because thinner first-year ice melts out more easily than older, thicker ice. Last summer, multiyear ice that had moved into the Beaufort and Chukchi seas during the previous winter largely melted out (see our October post).

Recent research from scientists at the NASA Jet Propulsion Laboratory shows that summer melt of old, thick ice in the Beaufort Sea has contributed substantially to the overall loss of thick multiyear ice in the Arctic. Using data from the QuikSCAT satellite, researchers Ron Kwok and Glenn Cunningham found that the Beaufort Sea lost 947,000 square kilometers (366,000 square miles) of multiyear ice during the summers of 1993 to 2009. 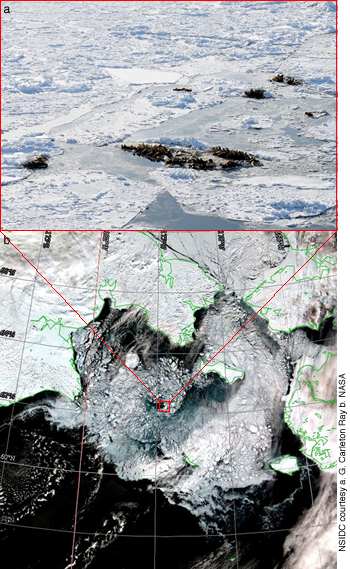 Many animals in the Arctic depend on the sea ice cover. A new study by researchers from the University of Virginia and NOAA suggests that seals and walrus rely on certain types of sea ice, called seascapes, for resting and reproduction. The character of these seascapes depends on local and regional weather and ocean conditions, and is changing in conjunction with the long-term downward trend in sea ice extent, cover, and structure.

Researchers G. Carleton Ray, James Overland, and Gary Hufford observed five seal and walrus species from the icebreaker Healy in the Bering Sea. They combined those observations with satellite images of the pack ice to determine the different seascapes that these species prefer. For example, walruses tend to haul out on thicker ice floes, separated by areas of open water, called broken ice. Ribbon and spotted seals instead gather in regions where the ice pack is thin and more dispersed, called loose pack. Understanding how these animals interact with their environments, a field known as landscape ecology, is crucial in this time of fast-changing ice conditions.