During April, Arctic sea ice extent declined at a steady pace, remaining just below the 1979 to 2000 average. Ice extent for April 2010 was the largest for that month in the past decade. At the same time, changing wind patterns have caused older, thicker ice to move south along Greenland’s east coast, where it will likely melt during the summer. Temperatures in the Arctic remained above average. 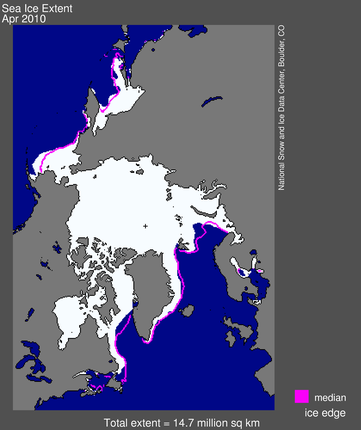 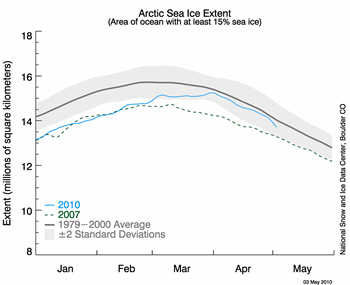 As we noted in last month’s post, the late growth in ice extent came largely from expansion in the southernmost Bering Sea, Barents Sea, and Sea of Okhotsk. These areas remained cool, with northeasterly and northwesterly winds, keeping the overall ice extent close to the average for the month of April. 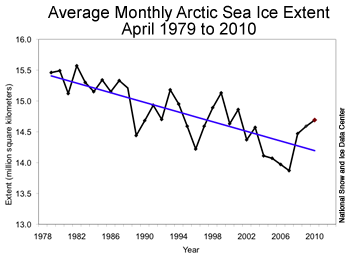 April 2010 compared to past years 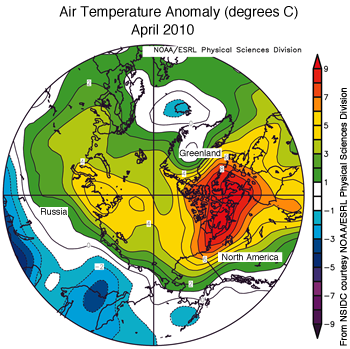 Figure 4. This map of air temperature anomalies for April 2010, at the 925 millibar level (roughly 1,000 meters or 3,000 feet above the surface), shows warmer-than-usual conditions over much of the Arctic Ocean and northern Canada. Areas in orange and red correspond to positive (warm) anomalies. Areas in blue and purple correspond to negative (cool) anomalies. —Credit: National Snow and Ice Data Center courtesy NOAA/ESRL Physical Sciences Division
High-resolution image

Continued high temperatures in the Arctic

Despite the late ice growth, Arctic air temperatures remained persistently warmer than average throughout the winter and early spring season. April temperatures were about 3 to 4 degrees Celsius (5 to 7 degrees Fahrenheit) above average across much of the Arctic Ocean, and up to 10 degrees Celsius (18 degrees Fahrenheit) above normal in northern Canada. Conditions in the Arctic were part of a trend of warmer temperatures worldwide in the past few months. An exception was the Sea of Okhotsk, where cool April conditions and northerly winds have slowed the rate of ice retreat. Visit the NASA GISS temperatures Web site for more information on global and Arctic temperatures over the past few months. 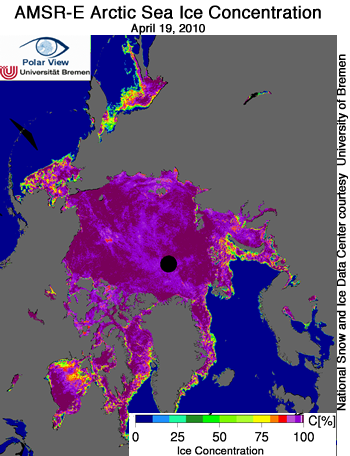 Figure 5. This map of sea ice concentration for April 19, 2010, based on data from the NASA AMSR-E sensor, shows polynyas (blue) in the Bering Sea, and scattered ice cover in the Barents Sea and Sea of Okhotsk. —Credit: National Snow and Ice Data Center courtesy University of Bremen IUP
High-resolution image

While NSIDC primarily uses the Special Sensor Microwave/Imager (SSM/I) and Special Sensor Microwave Imager/Sounder (SSMIS) sensors to track long-term conditions, we also look at data from higher-resolution sensors to assess current conditions in more detail. An image from NASA’s Advanced Microwave Scanning Radiometer – Earth Observing System (AMSR-E) sensor from April 19 reveals numerous polynyas, or areas of open water in the pack ice in the Bering Sea, and broad areas of more scattered ice cover in the Sea of Okhotsk, Barents Sea, and Hudson Bay. Such conditions usually indicate that ice is about to retreat rapidly. Over much of the coastline in this image, there is an indication of low-concentration sea ice. This is an artifact of mixed pixel areas, which contain both water and land. The same effect is seen occasionally in the SSM/I record. 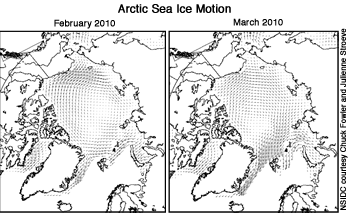 Figure 6. A change in wind patterns from February to March started to increase ice flow out of the Arctic along the coast of Greenland. —Credit: National Snow and Ice Data Center courtesy Chuck Fowler and Julienne Stroeve
High-resolution image

Ice motion in the Arctic Ocean

The thickness of sea ice at the beginning of spring plays a role in how much ice survives summer melt, so we pay attention to factors that influence ice thickness, such as ice motion. Ice motion is determined by winds and other factors, which in turn are influenced by weather patterns such as the Arctic Oscillation.

In February, the strongly negative phase of the Arctic Oscillation was associated with a strong Beaufort Gyre, enhancing ice motion from the western to the eastern Arctic. A weaker Transpolar Drift Stream also slowed the movement of ice from the Siberian coast of Russia across the Arctic basin, and reduced ice flow out of Fram Strait. The wind pattern changed in March, when the Arctic Oscillation went into a more neutral phase. As a result, the flow of ice sped up through Fram Strait and along the coast of Greenland. This pattern helps to remove older ice from the central Arctic, pushing it toward the warm waters of the North Atlantic, where it will melt.

In past decades, a strong Beaufort Gyre tended to retain old, thick ice in the Arctic Ocean. However, this may no longer hold true, because in recent years ice transiting the Beaufort Gyre tends not to survive the summer melt season. This summer’s weather conditions may be key to the survival of this older ice. For more information about the Beaufort Gyre and Transpolar Drift Stream, see the All About Sea Ice: Circulation Web page.

The SEARCH Sea Ice Outlook, an international, community-wide discussion of the upcoming September Arctic sea ice minimum, is once again underway. This year, a companion effort, the Sea Ice for Walrus Outlook (SIWO), will provide assessments and short-term (7- to 10- day) predictions of ice conditions in the Alaska region. SIWO is a resource for Alaska subsistence hunters, coastal communities, and other interested parties. See their Web page for regular updates and high-resolution satellite imagery of the region.