Arctic Sea Ice News RSS feed for automatic notification of analysis updates. Updates are also available via Twitter.Arctic sea ice extent for the month of July was the third lowest for that month in the satellite record, after 2007 and 2006. The average rate of melt in July 2009 was nearly identical to that of July 2007. A strong high-pressure system, similar to the atmospheric pattern that dominated the summer of 2007, brought warm winds and clear skies to the western Arctic, promoting ice melt. 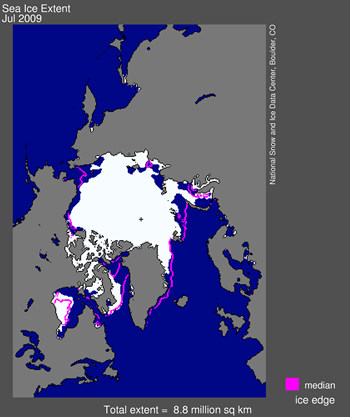 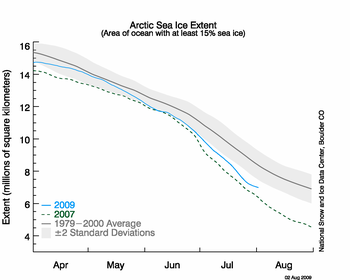 Figure 2. The graph above shows daily sea ice extent as of August 2, 2009. The solid blue line indicates 2009; the dashed green line shows 2007; and the solid gray line indicates average extent from 1979 to 2000. The gray area around the average line shows the two standard deviation range of the data. Sea Ice Index data.

The average pace of ice loss during July 2009 was nearly identical to that of July 2007. Ice loss sped up during the third week of July, and slowed again during the last few days of the month. 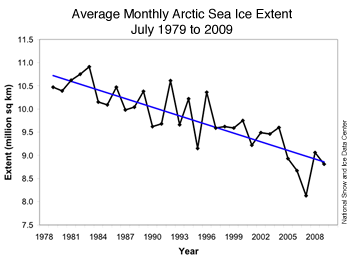 July 2009 compared to past years 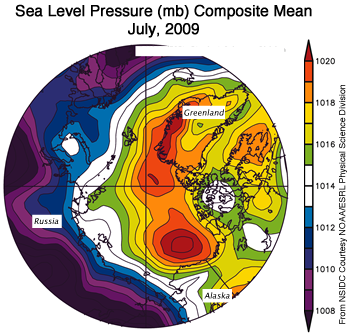 Figure 4. The map of sea level pressure (in millibars) from July 1 to 31, 2009 shows a strong high-pressure cell over the Beaufort Sea. In 2007, a similar high-pressure cell, combined with unusually low pressure over eastern Siberia, contributed to the record melt.—Credit: From National Snow and Ice Data Center, courtesy NOAA/ESRL Physical Sciences Division
High-resolution image

The atmospheric circulation pattern for summer 2009 has been similar to the pattern in summer 2007. As in 2007, an unusually strong high-pressure cell (an anticyclone) settled over the Beaufort Sea, bringing warm air into the Chukchi Sea. This year, the Beaufort Sea anticyclone, averaged for June and July 2009, was even stronger than the anticyclone in 2007. However, unlike 2007, this year the Beaufort Sea high-pressure cell is not paired with unusually low pressure over eastern Siberia, the “dipole” pattern that in 2007 promoted strong surface winds and extreme melt.

The strong Beaufort Sea high-pressure cell that occurred both this summer and in 2007 is part of a larger scale atmospheric pattern known as the Pacific North American (PNA) “teleconnection.” The airflow in the western hemisphere is usually characterized by a low pressure trough over the North Pacific, a ridge over western North America, and a trough over eastern North America. The PNA describes the strength of this pattern. When the PNA is positive, the normal pattern is amplified and the airflow becomes more “wavy” than usual. While the expressions of the PNA vary by season, the strong western North American ridge during the positive PNA favors a strong Beaufort Sea high pressure system. The stronger than usual trough over eastern North America also helps to explain the cool and rainy weather that has gripped this area much of the summer. 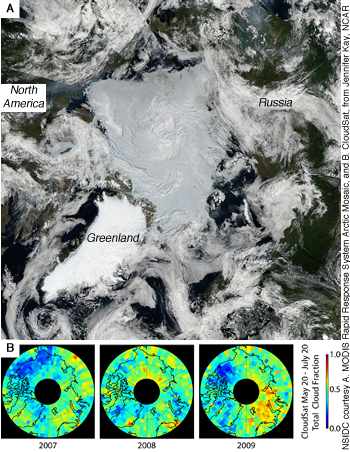 In 2007, unusually sunny skies throughout the summer melt season were one of the factors that helped lead to the record low ice extent. The clear skies allowed more of the sun’s energy to reach the surface, melting the ice and warming the ocean. This year, cloud fields provided by Jennifer Kay at the National Center for Atmospheric Research show fewer clouds over the Beaufort Sea than in 2007, leading to strong melt in that region. However, over the Chukchi and East Siberian Seas, the Arctic sky has been cloudier than 2007.