During the first half of July, Arctic sea ice extent declined more quickly than in 2008, but not as fast as in 2007. As in recent years, melt onset was earlier than the 1979 to 2000 average. International sea ice researchers expect another low September minimum ice extent, but they do not yet know if it will fall below the 2007 record. 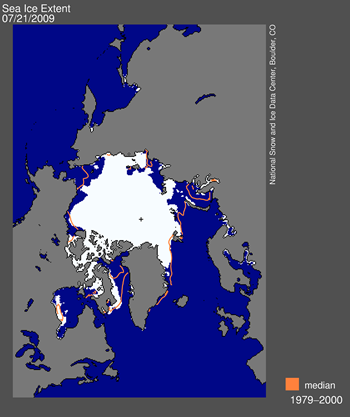 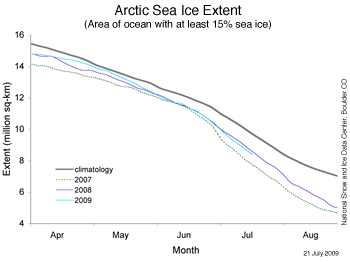 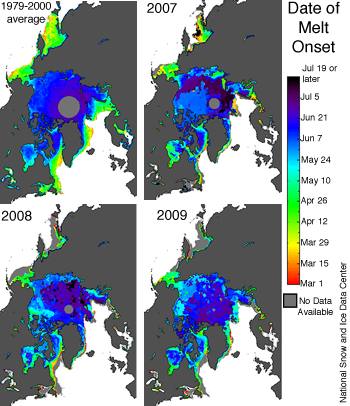 Figure 3. In recent years, sea ice melt in the Arctic Ocean has begun earlier than in the past. Colors in the map above indicate the date of melt onset; gray regions indicate areas where data is not available or not retrievable. Variations in ice type may result in some errors. Data are from the Defense Meteorological Satellite Program (DMSP) F-series satellite SSM/I and SSMIS sensors. —Credit: National Snow and Ice Data Center: Algorithm provided by Thorsten Markus, Goddard Space Flight Center
High-resolution image

Early or extended melt in response to rising atmospheric temperatures appears to be one of the factors contributing to the sharp decline of summer Arctic sea ice extent. When ice melts earlier, it leads to a lower albedo surface that absorbs more of the sun’s energy and promotes further melt.

The same satellite instruments that are used to measure ice extent also provide information on when ice begins to melt each year. In recent years, Arctic sea ice melt onset has begun earlier than in the past, and 2009 continues this pattern. Compared to average conditions over the period 1979 to 2000, melt this year started a week early in the Beaufort, Chukchi and Kara seas. In some regions such as the East Greenland and the Barents seas, melt began more than two weeks earlier than usual. 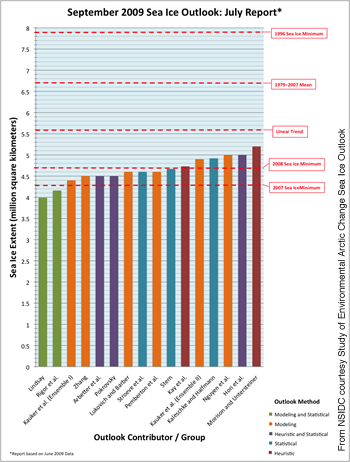 Figure 4. Scientists who contributed to the July Sea Ice Outlook report expect another low Arctic sea ice extent in September. Most of their projections fall near or between the 2007 record low and the second-lowest extent, which occurred in 2008.—Credit: From National Snow and Ice Data Center, courtesy SEARCH Sea Ice Outlook.
High-resolution image

As interest in Arctic sea ice builds, national and international scientific organizations are working together to make projections of the September 2009 sea ice minimum. Their assessments are summarized in the Study of Environmental Arctic Change Sea Ice Outlook.

The researchers make projections using a variety of techniques, ranging from sophisticated sea ice models to simpler statistical analyses. Their most recent report points to another extreme September sea ice minimum in 2009, with projections for the September monthly average ranging from 4.0 to 5.2 million square kilometers (1.5 to 2.0 million square miles). However, sea ice forecasting efforts are still in their infancy, and the resulting projections should not be taken as a true forecast, but rather as a way to gain insights into the changing Arctic climate. Whether or not 2009 will break the 2007 record still depends largely on atmospheric conditions during the rest of the summer.