NSIDC has transitioned from the Defense Meteorological Satellite Program (DMSP) F13 satellite, to the DMSP F17 satellite. Switching to the new satellite will allow us to continue our consistent long-term record of sea ice extent. 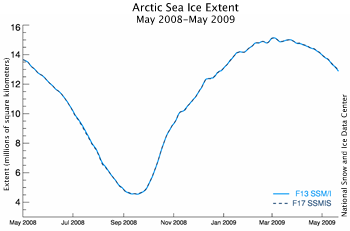 Figure 1. NSIDC now has more than a year of data from the Special Sensor Microwave Imager/Sounder (SSMIS) sensor on the DMSP F17 satellite, which has been intercalibrated with data from the F13 satellite. Note the close correspondence between the two data records. The average absolute daily difference was approximately 28,000 square kilometers (11,000 square miles). Sea Ice Index data. About the data. —Credit: National Snow and Ice Data Center
High-resolution image

The DMSP F13 satellite that has been central to our Arctic sea ice analysis for the past several years is nearing the end of its mission and is no longer a reliable resource for our sea ice products. As is standard data practice, we have transitioned to a newer sensor.

NSIDC now has more than a year of data from F17, obtained from the NOAA Comprehensive Large Array-data Stewardship System (CLASS). While the sensors on the two satellites are slightly different, they use the same microwave frequencies to collect sea ice data; by comparing a year of F17 data with a year of F13 data, we have been able to calibrate F17 to ensure its measurements are consistent with the prior F13 record. F13, in turn, had been similarly calibrated with prior generations of sensors, resulting in a consistent, long-term record of sea ice extent since 1979. The average absolute daily difference between data from F13 and F17 was approximately 28,000 square kilometers (11,000 square miles).