Sea ice extent has fallen below the 2005 minimum, previously the second-lowest extent recorded since the dawn of the satellite era. Will 2008 also break the standing record low, set in 2007? We will know in the next several weeks, when the melt season comes to a close. The bottom line, however, is that the strong negative trend in summertime ice extent characterizing the past decade continues. 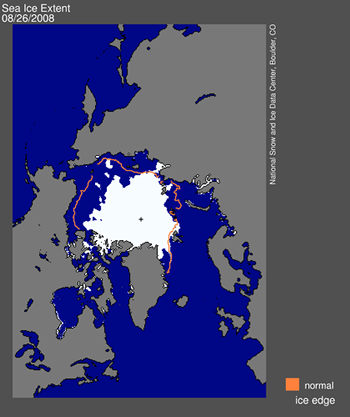 With several weeks left in the melt season, sea ice extent dipped below the 2005 minimum to stand as the second-lowest in the satellite record. The 2005 minimum, at 5.32 million square kilometers (2.05 million square miles), held the record-low minimum until last year.

Recent ice retreat primarily reflects melt in the Chukchi Sea off the Alaskan coast and the East Siberian Seas off the coast of eastern Russia. 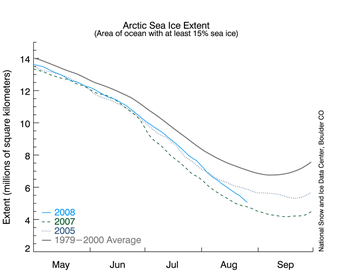 Through the beginning of the melt season in May until early August, daily ice extent for 2008 closely tracked the values for 2005.