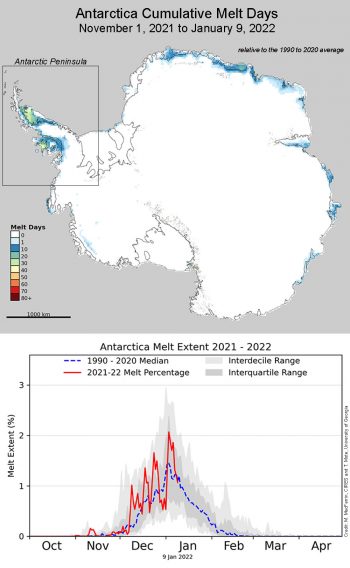 Figure 1a. The top map shows the total melt days for the Antarctic Ice Sheet from November 1, 2021, to January 9, 2022. The bottom graph shows daily melt extent as a percent of the ice sheet through January 9, 2022, and the average values and ranges for the reference period. 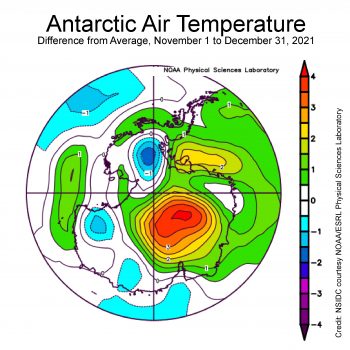 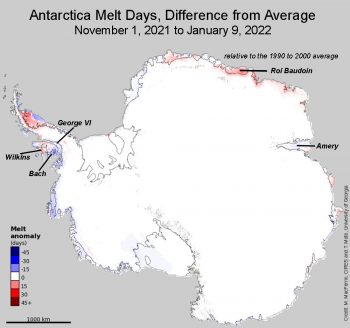 Figure 1c. This map of the Antarctic Ice Sheet shows melt days from November 1, 2021, to January 9, 2022, as a difference from average relative to the 1990 to 2020 reference period. Reds indicate areas of more melt; blues indicate areas of less melt.

The most significant surface melting as of this post occurred in the northern part of the Antarctic Peninsula (Figure 1a). Strong, warm winds flowed east and downslope on the eastern side of the northern Antarctic Peninsula, causing melting. A strong Amundsen Sea low and a high positive Southern Annular Mode (SAM) pattern brought snow and windy conditions to the southwestern side of the Peninsula.

While the interior of the East Antarctic Ice Sheet was quite warm during November and December relative to the reference period, this region typically does not approach the melting temperature (Figure 1b). Coastal areas of the continent, however, had average to above average surface melting. Cool conditions have limited the number of melt days across the Amery Ice Shelf (Figure 1c). 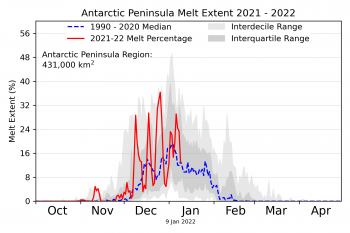 Figure 2a. This graph shows the daily total melt as a percent of the total ice area of the region through January, 2022, and the average values and ranges for the 1990 to 2020 reference period. 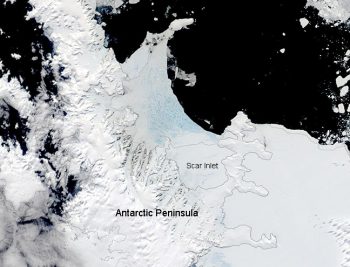 Figure 2b. This close-up image of the Antarctic Peninsula shows the Larsen B embayment with deep meltwater fractures. Larsen B lies north of the remnant ice shelf at the Scientific Committee on Antarctic Research (SCAR) Inlet. This image was acquired from the Moderate Resolution Imaging Spectroradiometer (MODIS) instrument on the NASA Terra satellite on December 21, 2021.

One of the few regions with significant surface melting on the Antarctic Ice Sheet is the northern Antarctic Peninsula, where a series of windstorms has resulted in several brief early-season melt events (Figure 2a). Seasonal landfast sea ice filling the Larsen A embayment broke apart and began to drift northward on December 8. Multiyear fast ice in the Larsen B embayment, in place continuously since early 2011, now has widespread meltwater flooding with some deeper ponds and some areas drained by narrow fractures (curved whiter streaks). The outer fringe of this fast ice also broke out on December 8. South of the Larsen B embayment, the remnant ice shelf known as Scientific Committee on Antarctic Research (SCAR) Inlet and the Cabinet Inlet area of the northwestern Larsen C ice shelf have extensive surface melt pooling, relatively early in the melt season (Figure 2b).

Other melt-prone regions of the Antarctic Ice Sheet show little evidence of surface meltwater ponds, but there were some indications of wet snow by late December. A few days of melt is evident on the northern George VI Ice Shelf and the Bach Ice Shelf (Figure 1a, top), suggesting at least wet snow formation by late December. As melt progresses further, a bluish tint to true-color visible images would indicate meltwater flooding, but that is not yet seen in Moderate Resolution Imaging Spectroradiometer (MODIS) imagery in NASA Worldview. Conditions may still change significantly through the remainder of the melt season.