On August 14, 2021, rain was observed at the highest point on the Greenland Ice Sheet for several hours, and air temperatures remained above freezing for about nine hours. This was the third time in less than a decade, and the latest date in the year on record, that the National Science Foundation’s Summit Station had above-freezing temperatures and wet snow. There is no previous report of rainfall at this location (72.58°N 38.46°W), which reaches 3,216 meters (10,551 feet) in elevation. Earlier melt events in the instrumental record occurred in 1995, 2012, and 2019; prior to those events, melting is inferred from ice cores to have been absent since an event in the late 1800s. The cause of the melting event that took place from August 14 to 16, 2021, was similar to the events that occurred this late July, where a strong low pressure center over Baffin Island and high air pressure southeast of Greenland conspired to push warm air and moisture rapidly from the south. 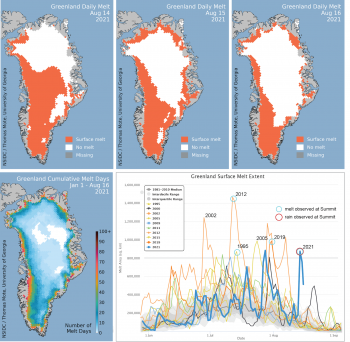 Figure 1a. The top maps show daily melt extent for the Greenland Ice Sheet for August 14, 15, and 16, 2021. The lower left map shows cumulative melt days for 2021 through Aug 16. The lower right graph shows daily melt extent during mid-summer for all years in the satellite record with a maximum melt extent greater than 800,000 square kilometers (309,000 square miles). The graph areas depict the daily melt area for the 1981 to 2010 average, the interquartile range, and the interdecile range. All melt events observed by the NSIDC satellite record are circled in cyan; the rain (red circle) and melt event of 2021 is the only event of this type in the 43-year record. 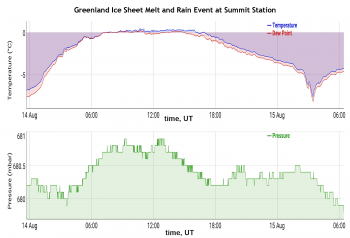 Figure 1b. The top graph shows 2-meter air temperature and dew point for Summit Station, Greenland, on August 14 and 15. The bottom graph shows air pressure at Summit during the melt event.

Temperatures surpassed the freezing point at Summit Station around 0700 UTC (5:00 am local time) on August 14, and the rain event began at the same time (Figure 1b). For the next several hours, rain fell and water droplets were seen on surfaces near the camp as reported by on-station observers. At about 1400 UTC the snow surface began to form thin sheets of ice crystals as the rain froze into the snow. Winds were 9.8 meters per second (22 miles per hour) from the southwest with a mix of freezing and non-freezing rain. Temperatures peaked at 0.48 degrees Celsius (33 degrees Fahrenheit) around 10:40 UTC and dropped below freezing around 16:20 UTC. Temperatures fell steadily through the evening. As skies cleared late in the evening, a sharp cooling brought temperatures to -8.5 degrees Celsius (16.7 degrees Fahrenheit) early on August 15 (Figure 2). Temperatures at Summit did not reach the melting point on August 15 or 16.

Figure 2a. The top plot shows 2-meter air temperature for August 14, as a departure from the 1979 to 2000 reference period for the Arctic and surrounding regions. The plot indicates the warm conditions in southwestern Greenland extending to the Summit region. The bottom plot shows average sea level pressure for the same day. Air circulation between the low pressure center over Baffin Island and the high pressure center off the southern tip of Greenland drove air and moisture rapidly northward. The white star marks the location of Summit Station in both maps. 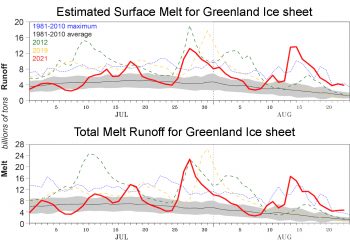 Figure 2b. The top graph shows estimated daily surface runoff and the bottom graph shows daily total melt water (no rain) for several recent warm-summer years for the Greenland Ice Sheet. The grey band and dark line show the average daily values for the 1981 to 2010 reference period; the blue dotted line shows the maximum runoff or melt mass within the 1981 to 2010 record. The data are from a regional climate model run using ERA-5 reanalysis as forcing, and forecast data for the period shown following Aug 14.

An air circulation pattern very similar to the extensive melt events of late July (see previous post) caused the extensive melt and rain event of mid-August 2021. A moderately strong low pressure center (center pressure 987 millibars) moved northeastward across Hudson Bay towards Baffin Island (Figure 2a). At the same time, high air pressure off the southern end of Greenland in the Denmark Strait created a strong pressure gradient in the southern Labrador Sea and Baffin Bay, forcing a strong wind event from the south-southwest to the northeast and onto the southwestern Greenland coast. This warm moist air then covered the island over the next few days. As clearing skies emerged on August 15, much of the north-central ice sheet cooled significantly.

Warm conditions and the late-season timing of the three-day melt event coupled with the rainfall led to both high melting and high runoff volumes to the ocean. Data from MARv3.12 suggests this was the largest rainfall event since 1950, the beginning of ERA-5 (Figure 2b). Melt volume does not, however, include the additional water from rainfall during the warm air intrusion, although rainfall in runoff areas (where the surface is icy and impermeable) is included. Over most of the ice sheet, meltwater (or rainfall in the upper reaches of the ice sheet) percolates into remaining snow and refreezes; however, in bare ice and water-saturated snow areas near the coast, meltwater (and rainfall) runoff occurs resulting in the ice sheet losing mass. On August 15 2021, the surface mass lost was seven times above the mid-August average according to MARv3.12. At this point in the season, large areas of bare ice exist along much of the southwestern and northern coastal areas, with no ability to absorb the melt or rainfall. Therefore, the accumulated water on the surface flows downhill and eventually into the ocean. 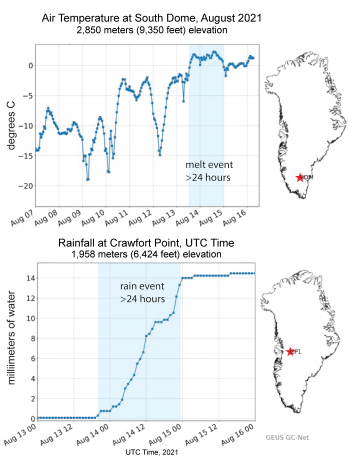 Figure 3. The top panel shows air temperature in degrees Celsius from an automated weather station at South Dome, Greenland, for August 13, 14, and 15, showing the more extensive time above the freezing point for the southern area of the upper Greenland Ice Sheet. The bottom graph shows accumulated rainfall in millimeters at Crawford Point Weather Station, located above the area of meltwater ponds and runoff on the western ice sheet.

Above freezing temperatures and rainfall were widespread to the south and west of Greenland during the three-day period, with exceptional readings from several remote weather stations in the area. Total rainfall on the ice sheet was 7 billion tons. At South Dome, the highest point on the southern lobe of the ice sheet at 2,850 meters (9,350 feet) elevation melt was recorded by satellite during all three days of the warm event, and the early part of this period (Figure 3) shows the rapid warming and persistent above-freezing conditions for August 14 and 15.

The Geological Survey of Denmark and Greenland (GEUS) is carrying forward the Greenland Climate Network (GC-Net) initiated by Konrad Steffen of the Cooperative Institute for Research in Environmental Sciences (CIRES) at the University of Colorado Boulder in 1995.

Summit Station is owned and operated by the National Science Foundation Office of Polar Programs with permission from the Government of Greenland.

A special acknowledgement goes out to Alicia Bradley and Zoe Courville for reporting observations at Summit Station, Greenland.