Surface melt and total melt-day area for the Greenland Ice Sheet at the end of the 2021 spring season was below the 1981 to 2010 average. Snowfall and rain (minus runoff) added mass to the ice sheet. As of June 20, total mass gain for the ice sheet since September 2020 was slightly above average. The spike from June 25 to June 27 will be discussed in later a post. 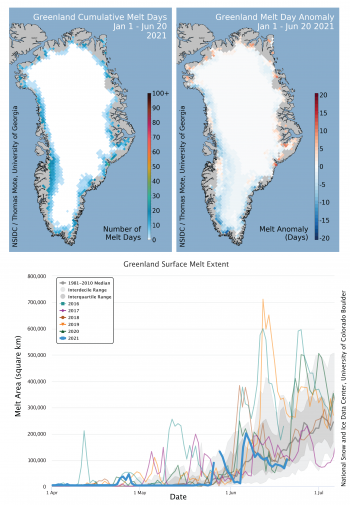 Figure 1. The top left map of the Greenland Ice Sheet illustrates the total number of melt days through June 20, this year. The top right map shows the difference between total 2021 melt days from January 1 to June 20 and the number of 1981 to 2010 average melt days for the same period. The lower graph shows daily area in square kilometers of surface melting from April 1 to June 20, 2021, with daily melt extent trends for the preceding five years.

The total aerial extent of surface melting (total melt-day extent) through June 20 was just over 2.49 million square kilometers (961,000 square miles), 1.5 times below the 1981 to 2010 average of 3.72 million square kilometers (1.44 million square miles). Melting was slightly below average along the west-central ice sheet, and well below average (10 to 12 days behind the average rate) along the southwestern edge of the ice sheet. Limited areas of the north and northwest had slightly above average melting, but the total extent of these areas was low. 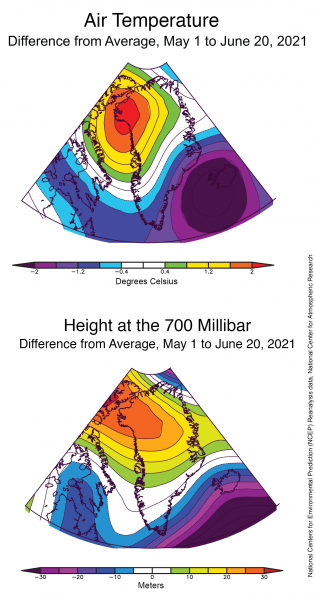 Average air temperature at 700 millibar (about 10,000 feet) and the average height of the 700 millibar level (a measure of air pressure) summarize springtime weather conditions. Air temperatures above Greenland varied across the ice sheet, with warm conditions in the northwest and cool conditions across the southeast. The region near Thule in the northwest was more than 2 degrees Celsius (4 degrees Fahrenheit) above the 1981 to 2010 average, with conditions near the major Helheim Glacier in the southeast were about 2 degrees Celsius (4 degrees Fahrenheit) below average.

Air pressure patterns, indicated by the height above average of the 700 millibar level (about 10,000 feet above ground, but higher under high pressure conditions, and lower when low air pressure is present) show an area of moderate high pressure in the northwest of the island and low pressure over the Irminger Sea between Greenland and Iceland. 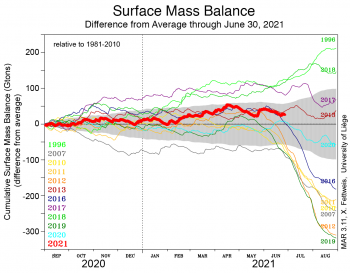 Figure 3a. This graph shows the estimates of surface mass balance (SMB) for the Greenland Ice Sheet for the 2020 autumn to 2021 spring season (red line) through June 30, 2021 (based on forecast and re-analysis), relative to the 1981 to 2010 average. It also includes several recent years for comparison. SMB is the sum of snowfall and rainfall, minus any evaporation or runoff. The estimates come from the MARv3.11 model based on daily weather measurements and projections. 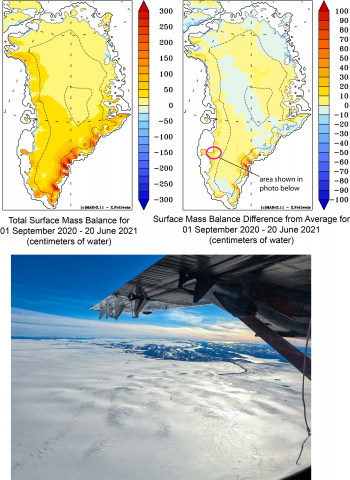 Figure 3b. The top left map shows the total surface mass balance (SMB) over Greenland since September 1, 2020 up to June 20, 2021. The top right map shows the difference from the 1981 to 2010 average, in centimeters of water equivalent. At the bottom is a picture of the west-central area of the Greenland Ice Sheet taken on June 21, 2021, showing persistent snow cover over the fractured ice of the ice sheet.

As of June 20, total surface mass balance for the ice sheet was slightly above average total input of snow and rain since September 2020, at about 550 billion tons, 41 billion tons more than average (Figure 3a).

Total snowfall was slightly above average for the ice sheet. Areas that received extra snow this year were across the southeast, where some areas saw 50 to 70 centimeters (20 to 28 inches) more snow water equivalent than average, and to a lesser degree along the western coast (Figure 3b). Large areas of the central and northeastern ice sheet were near-average for the year so far. 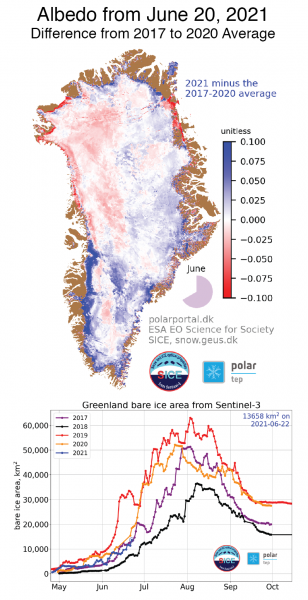 Figure 4. The map shows albedo, or reflectivity, derived from the European Space Agency (ESA) Sentinel-3 satellite Ocean and Land Colour Instrument (OLCI) for the Greenland Ice Sheet on June 20, 2021, compared to the 2017 to 2020 average. Red areas in the northwest and portion of the northeast indicate darker surfaces compared to the 2017 to 2020 average. The plot on the bottom shows total bare ice exposure for the Greenland Ice Sheet for the past four years and for 2021 through June 20.

Using the European Space Agency (ESA) Sentinel-3 satellite Ocean and Land Colour Instrument (OLCI), Greenland’s snow and ice albedo, or net reflectivity, tracked on a daily basis at a resolution of 300 meters (about 1,000 feet). This product is now available from the Danish Greenland Geological Survey (GEUS). The map for June 20 shows a slightly darker surface over a broad region of the northwestern ice sheet, with narrow areas of much darker surface near the coast where above average melting and runoff has occurred. Most of the central western ice edge and southwest ice edge, where ablation areas or exposed ice occur, was considerably brighter than average (blue areas). This region is usually much wider at this point in the season but is still covered by some snow from the past winter, as shown in the Figure 3b photograph. The extent of bare ice exposure is tracking near the lowest levels for the last five years except 2018, which was an especially snowy and low-melt year.