Melting through the peak of Greenland’s summer melt season has been well above the 1981 to 2010 average, but below the levels of many previous summers of the past decade. While the northeast and southwest areas of the ice sheet had significantly more melt than average, the melt extent over the southeast and northwest coasts was lower than average. The 2020 surface runoff to date is lower than in recent years. 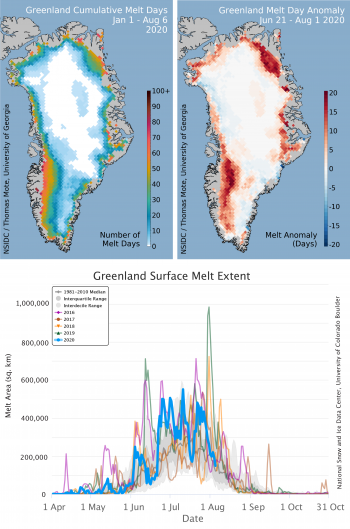 Figure 1. The top left map of the Greenland Ice Sheet shows the total number of surface melt days from January 1 through August 6, 2020. The top right map shows the difference between total 2020 melt days and the number of 1981 to 2010 average melt days from June 21 through August 1. The lower graph shows daily area in square kilometers of surface melting from June 21 to August 1, 2020, with daily melt extent trends for the preceding four years.

The total aerial extent of surface melting through August 1, 2020, was well above the 1981 to 2010 average. Total melt-day extent was 18.6 million square kilometers (7.18 million square miles) for 2020 versus 14.4 million square kilometers (5.60 million square miles) for the 1981 to 2010 average. The season was marked by a series of moderate spikes in melt extent, primarily in the southeast and northwest. The peak one-day melt extent for 2020 to date was July 10, when 551,000 square kilometers (212,700 square miles), or 34 percent of the ice sheet surface, melted. The maximum number of melt days occurred in two areas, along the southwest edge and northeast corner of the ice sheet, at around 65 out of 123 days from April 1 to August 1, 2020. An isolated area near Helheim Glacier and Kangerlussuaq reached 75 days out of 123 days. 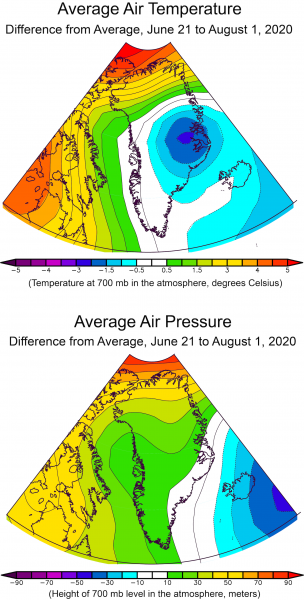 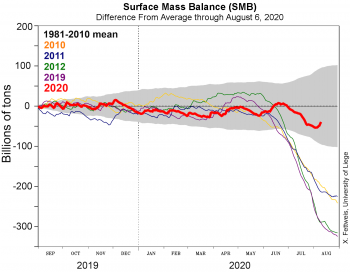 Figure 3. This graph shows the surface mass balance (SMB) for the Greenland Ice Sheet from autumn 2019 through August 6, 2020 (red line), relative to the 1981 to 2010 average. It also includes several recent high-mass-loss years for comparison. SMB is the sum of snowfall and rainfall, minus any evaporation or runoff. The estimates come from a model based on daily weather measurements. 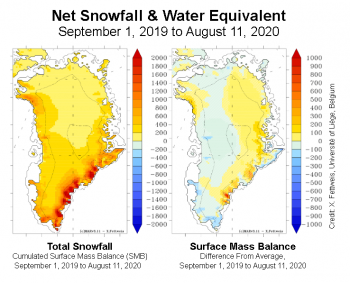 Figure 4. The left map shows total snowfall and rainfall, minus runoff or evaporation, which is the surface mass balance (SMB) for the Greenland Ice Sheet, from September 1, 2019 through August 11, 2020. The right map shows the difference from average net snowfall for the same period. Numbers are shown in centimeters (0.4 inches) of water equivalent. 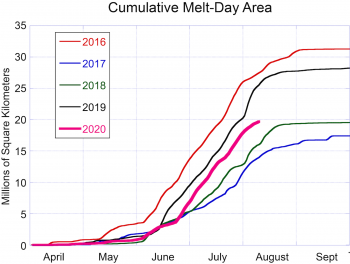 Figure 5. This figure shows cumulative melt-day area (the sum of the areas for each melt day) since April 1 for 2020 and the four preceding years, showing 2020 is near the mid-range of recent years at this point in the season.

Wind patterns over the ice sheet favored a westward to southwestward flow, bringing air off the far northern Atlantic Ocean (Norwegian Sea) across the ice sheet. The variation in circulation this year is nearly the opposite of that of Summer 2019, which resulted in the melting and snowfall being less extreme this year compared to last year (Figure 3). Net mass balance of snowfall—snow and rain input minus evaporation and melt runoff—is below average all along the western side of the ice sheet but near average to slightly above average along most of the eastern coastal area (Figure 4).

Figure 6. The top left image shows a NASA Moderate Resolution Imaging Spectroradiometer (MODIS) mosaic of Greenland on July 28, 2020. The top right image shows the MODIS-derived albedo (reflectivity) anomaly for the Greenland Ice Sheet from July 22 to 25, 2020. The bottom image shows the dark snow landscape with a large runoff stream and moulin, which is a drainage hole in the ice sheet, east of Kangerlussuaq, Greenland. 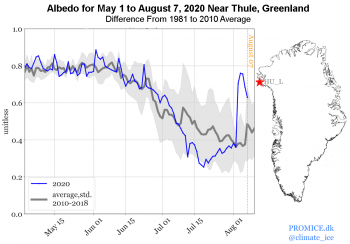 Figure 7. This figure shows the albedo, or the brightness and reflectivity, of the snow surface near Thule, Greenland, over the summer of 2020 compared with the 1981 to 2010 average.

Below-average summer snowfall along the western side of Greenland increased ablation, exposing ancient dust and soot on the surface (Figure 6). This has led to some of the darkest snow-cover conditions seen to date in Greenland along its western ablation area. The ablation area is the area of the glacier where more glacier mass is lost than gained, and where all the winter snow melts each year, and older underlying ice is exposed and melts further. Conditions near Humbolt Glacier and the Thule US military installation in the northwest were also unusually dark (Figure 7). High runoff in these areas leads to meltwater streams that often flow into the ice sheet and down to the bedrock below, creating dramatic openings in the ice sheet called moulins (Figure 6).

In memoriam of Koni Steffen 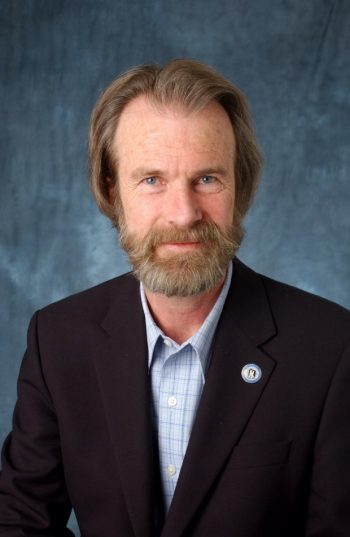 Former Cooperative Institute for Research in Environmental Sciences director Konrad Steffen passed away while conducting field work in Greenland on August 8, 2020. This post is dedicated to Koni.

On Saturday, August 8, Swiss scientist and professor Konrad Steffen died in an accident while conducting field work in Greenland. Koni, as he was known to many, devoted his professional life to the study of polar climate and the processes of weather and snow melt on Greenland. He was director of the Swiss Federal Institute for Forest, Snow and Landscape Research (WSL), a forest and environmental group based in Zurich, and was former director of University of Colorado’s Cooperative Institute for Environmental Sciences (CIRES), which is the parent institute of the National Snow and Ice Data Center (NSIDC).

Koni embraced and relished his work in Greenland, and introduced dozens of dignitaries and scientists to the ice sheet, his favorite landscape. He was 68-years old.