Despite moderately higher-than-average air temperatures and high air pressure over Greenland, the 2017 melt season began modestly. As of June 30, total melt area was the lowest since the 2009 melt season.

To update the Greenland Today site, the team has improved the graphics and land masking; archived records reflect the new values. 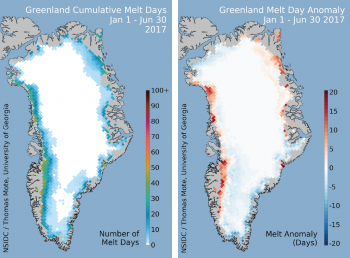 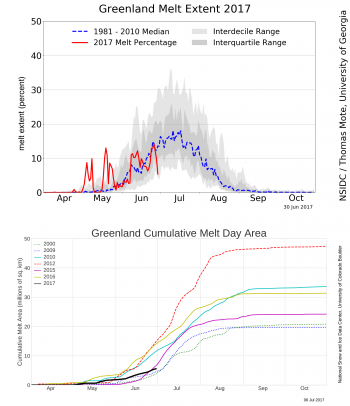 Figure 2. The top chart shows the daily melt extent as a percentage of the ice sheet area through 30 June 2017. The bottom chart shows the cumulative melt area (the running sum of the daily area experiencing melt) in millions of square kilometers for certain years between 2000 to 2017.

Two significant melt events marked the early part of Greenland’s 2017 melt season, but overall melt extent was low through the end of June. Total cumulative melt extent for 2017 is the lowest in the satellite record since 2009. Only 2009, 2006, and 2000 had less melt at this point since 2000. Daily melt extent through June 30 of this year has yet to surpass 20 percent of the ice sheet in any single day, and melting has been confined to lower elevations. Melting occurred much less frequently than average (relative to the early melt seasons spanning 1981 to 2010) in much of the ice sheet, especially in the southern and northwestern regions, while western low-elevation areas and the far northeastern ice edge had slightly higher-than-average melting. 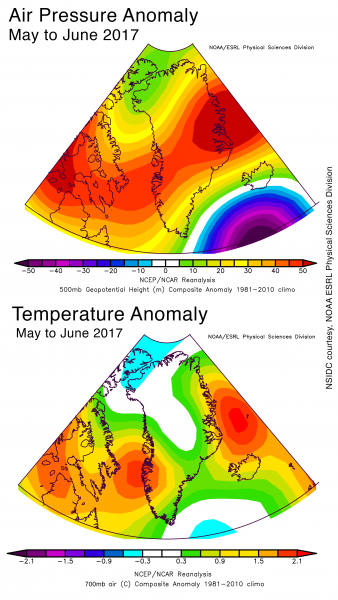 Figure 3. The top plot shows the air pressure anomaly (altitude departure from the average of the 500 millibar pressure level) for May to June 2017. This is equivalent to the variation in air pressure, with higher levels indicating high pressure; note that the typical altitude of 500 millibars pressure is about 18,000 feet. The bottom plot shows temperature departure from average at the 700 millibar level (approximately 10,000 feet above sea level) for May to June 2017. The reference period for both plots is 1981 to 2010.

A pattern of slightly higher-than-average pressure over most of central and northern Greenland for May and June brought southerly and southwesterly winds along the western edge of the ice sheet, where most of the melt days have occurred. Temperatures in that area were about 1.5 to 2 degrees Celsius (2.7 to 3.6 degrees Fahrenheit) higher than average, and similar warmth on average covered the northeastern coast. However, much of the southeast and northwest of the island were near average temperatures for May and June. 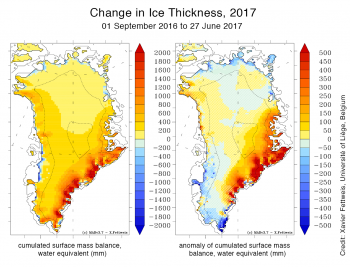 Figure 4. These maps are the result of a climate model simulating surface mass balance departure from average for Greenland as of June 27, 2017, based on weather data. Surface mass balance is the total net new material added (or lost) from the ice sheet surface from snowfall, rain, evaporation, and wind. Units are millimeters of water equivalent (1 millimeter is about 0.04 inches; for reference, 500 millimeters is about 19 inches).

Snowfall in eastern and southeastern Greenland through the 2016 to 2017 autumn and winter was far above average, adding 500 millimeters water equivalent to some areas. Much of this occurred during a series of storms in October, when a large persistent low-pressure pattern southeast of Greenland pushed warm moist air onto the eastern and southeastern mountains. This additional snowfall increased the overall mass of the ice sheet by about 150 billion tons more than average prior to the start of the melt season. However, melting and run-off, though off to a slow start, will reduce this excess mass through the course of the summer. As the season progresses, we will evaluate whether the total effect of the full annual climate led to mass gain or mass loss for the ice sheet.

Soot in the pristine snow 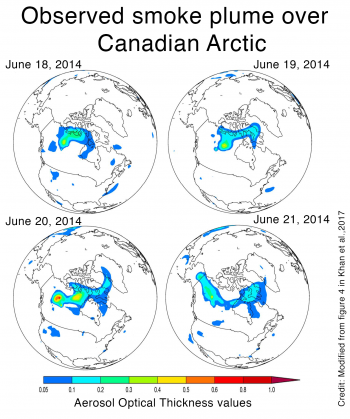 Figure 5. An observed smoke plume above the western Canadian Arctic drifted toward Greenland from 18 to 21 June 2014. Aerosol optical thickness (AOT) in yellow light (550 nanometer) measured the degree to which aerosols prevented the transmission of light. This soot was identified in a snow pit in Greenland during field work two years later. A value of 1 indicates that 37 percent (1/e where e is Euler’s number) of light can pass through the aerosol layer. A value of 0 indicates no absorption by the aerosol.

For years it has been suspected that increasing forest burning in the high Arctic has brought soot to the Greenland ice sheet, darkening the snow and  increasing melting. Now two recent studies have identified levels of black carbon in snow—not just in Greenland, but across many parts of the cryosphere. Among other results, the studies showed that indeed soot from fires in northwestern Canada was deposited within days in Greenland, thousands of miles away. Although sunlight quickly modifies the chemical components of soot, once deposited it is stable, and can remain for many years. Thus, as the ice sheet accumulates more soot from fires and manmade causes, its melting in the succeeding summers accelerates due to the persistent presence of black particles in the snow and ice.

Greenland Today has introduced improvements to the site in the past two weeks. Changes in supporting data sets and graphics have both enhanced the accuracy of the product and the interactivity of the site.

The ice sheet mask has been updated to restrict the melt determination more closely to the ice edge. In particular, areas along Greenland’s northeastern side, where scattered small ice masses and heavy seasonal snow cover exist, have been masked out. This part of the island is primarily bare ground in late summer, and was frequently mis-mapped as an ice sheet melt area, often with a persistent reading well into autumn. An improved mask has also been applied to other areas with similar issues, to both the historical data and daily near-real-time coverage. Note that while this has reduced the overall ice sheet area and melting area, the update more accurately reflects ice sheet melt; but in doing so, does not impact the trends or discussion of Greenland’s conditions under a changing climate.

Color schemes for several of the graphics have also been adjusted. The interactive chart of daily melt extent has been updated to better represent data from the earlier sensor (Scanning Multichannel Microwave Radiometer (SMMR), the main sensor from 1979 to 1987). During the SMMR years, data was collected every other day. To compensate for the missing days, current climatology is computed by averaging the daily melt on days void of data. This new approach has allowed the Greenland Today team to show more precise cumulative melt plots and to correctly compute the cumulative melt climatology.

In addition, two computer glitches have been fixed on the interactive plot. In the past, statistics could mix, but now users can clearly see either mean and standard deviation, or median and interquartile and interdecile ranges. And finally, the SVG file now downloads properly.