For six days in early April, unusual weather patterns produced an early season melt event on the Greenland Ice Sheet, covering up to 10 percent of its surface area. Such an event is unusual but not unprecedented; the record surface melt season of 2012 began in a similar manner. Local meteorological records were set in southwestern Greenland towns and at several ice sheet weather stations.

Figure 1a. The maps show the melt area pattern on April 11 (left) and cumulative days of surface melting through April 17 (right) on the Greenland Ice Sheet.
Figure 1b. The graph above shows the daily extent of melt during 2016 through April 17, 2016 on the Greenland Ice Sheet surface, as a percentage (red line). The 1981 to 2010 average is shown by a blue dashed line. The gray area around this average line shows the two standard deviation range of the data.

An early melt event occurred on April 10 through April 15, encompassing the central western and southeastern Greenland coastal areas. The event was a result of a large pulse of mid-Atlantic air moving northward, bringing record warm air to the entire ice sheet and rain along the western coast. Approximately 10 percent of the ice sheet surface melted on April 11, dropping to 5 percent on April 12 and less on later days. A melt event of similar magnitude occurred on April 6 to 9 of 2012, which became the current record surface melt and melt-runoff season for the satellite era (since 1978). (These values and dates are slightly different from those reported in other news releases, because they are based on different snowmelt mapping methods). Early melt events are important as they lower the surface albedo by increasing the snow grain size. A lower albedo allows for more absorption of the sun’s energy, fostering more ice melt. 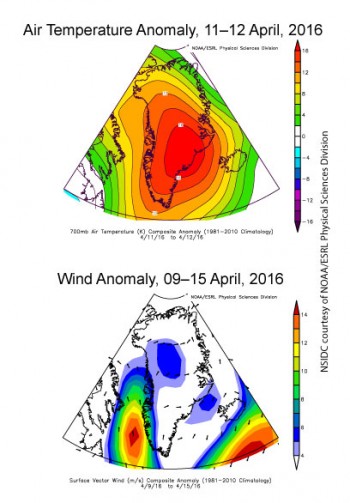 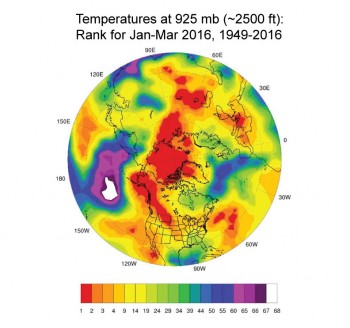 Figure 3: The map shows average temperatures for the Northern Hemisphere between January and March 2016 at the 925 millibar level (approximately 2,500 feet altitude).

These warm April conditions follow on the warmest winter (January 1 to March 31, 2016) recorded for the Arctic. Large areas of the Arctic reported the warmest conditions in 67 years of weather model data, including the northern half of the Greenland Ice Sheet, much of the central Arctic, southern Alaska and the Canadian Rockies, and parts of central Siberia. The north-central Pacific and northern Atlantic saw temperatures among the lowest on record for that period.

How’s the snow this year in Greenland? 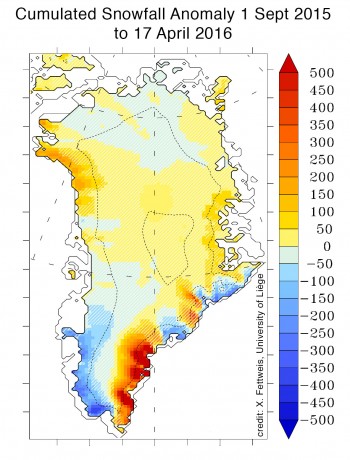 Figure 4: This map of Greenland shows the total precipitation (in millimeters of water equivalent) from September 1, 2015 to April 16, 2016. The hatched area indicates regions with near-average snowfall levels. Anomalies are compared to the 1981 to 2010 average.

Fall, winter, and early spring snowfall in Greenland is near-average, except in South Greenland where anomalies are higher than the interannual variability. Above average snow totals occurred in the southeast while snowfall was below average along the southern western coast where the early melt event occurred. Last season’s snow can absorb much of this early meltwater. However, a lower than normal winter snowpack combined with this early melt event favor higher summer melt in this area because bare ice below the winter snow cover should appear sooner. Snowfall also plays an important role in the albedo of the ice sheet. New snow has an albedo between 0.85 and 0.90, absorbing only 10 to 15 percent of the incoming solar energy, but as warm conditions and surface melting continue, the surface darkens as the snow becomes coarse and wet.