The Greenland Ice Sheet began 2015 (January 1 to May 31) with cooler-than-average conditions and higher-than-average snowfall accumulation, related to a near-continuous positive North Atlantic Oscillation (NAO) index pattern through the period. Surface melting was limited to just a few of the southern coastal fjord areas. The reduced melting and high snowfall has led to higher surface albedo (a whiter surface) near the coast than is typical for May. However, as June has unfolded, surface melt extent has increased to near-average levels. Most of this new melt extent is in the central western section near Jacobshavn. The albedo trend along the coastal ice has reversed, consistent with melt onset. However, below average temperatures persist into early June. 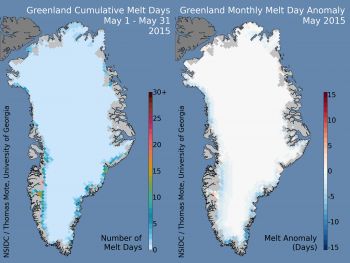 Figure 1. The maps show the cumulative days of surface melting (left) and anomalies in the number of melt days (right) for May 2015 (31 days) on the Greenland Ice Sheet. Anomalies are compared to the period 1981 to 2010. Data are from the MEaSUREs Greenland Surface Melt Daily 25km EASE-Grid 2.0 data set.  About the data

The number of surface melt days along the Greenland coast was well behind the levels typical of this time of year (relative to 1981 to 2010) for the entire southern rim of the ice sheet. Surface melting in May typically extends inland by 100 to 150 kilometers (60 to 90 miles) along the southern ice sheet perimeter, and along the northwestern Greenland coast (Mellville Coast) for 20 to 30 kilometers (14 to 20 miles) inland.

An examination of the ice sheet masking used for the Greenland Today daily melt and cumulative melt determination has revealed some areas of northern Peary Land and Kronprince Christian Land that are treated as ice sheet when in fact they are seasonal snow and patchy ice areas less than 25 kilometers across (the size of our measurement grid and sensor data samplings). These areas are indicating ice sheet surface melting incorrectly. The data set has been uniformly processed with the current (inaccurate) mask, and so comparisons such as our anomaly plots and cumulative melt extent are generally consistent. Extents and anomalies outside of these two northern peninsula areas are accurate. A new mask and full reprocessing are scheduled for late in 2015. 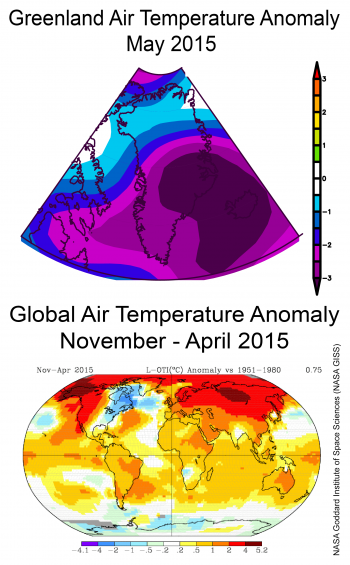 Figure 2. The plot at top shows Greenland air temperature anomalies at the 700 millibar level (about 10,000 feet altitude) in degrees Celsius for May 2015. Blues and purples indicate lower than average temperatures. The plot at bottom shows average global monthly air temperature anomaly for November to April 2015, relative to a baseline period of 1951 to 1980, the reference period used by the NASA Goddard Institute of Space Sciences (NASA GISS). 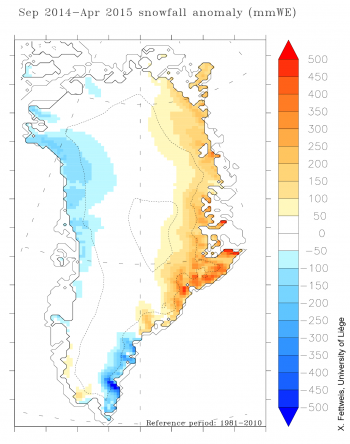 Figure 3. The plot shows snowfall anomaly for Greenland (in millimeters of water equivalent) for the winter season of 2014 to 2015. The majority of the eastern coast saw considerably more snowfall than the 1981 to 2010 average. Data are from the NCEP-NCARv1 reanalysis forced model (climate model run using measured weather values as forcing).

The low early numbers for surface melt extent are consistent with a very cool month of May, with mid-troposphere temperatures 0.5 degrees Celsius (1 degree Fahrenheit) or more below average everywhere on the island, reaching 3 degrees Celsius (5 degrees Fahrenheit) below the 1981 to 2010 average along the western coast. Cooler-than-average conditions were the rule for the entire winter and early spring, particularly for the western and southwestern sections of the ice sheet. Notable is that this region, extending southwestward to the northeast United States and eastern Canada, is one of the few large regions of the globe with significantly below-average temperatures during this period. The warmest 12 months on record for the globe occurred during May 2014 to April 2015.

The major circulation pattern governing climate trends, the NAO (North Atlantic Oscillation), has been predominantly positive (typical index values of +0.5 to +1.5) through the early part of the year. This tends to produce easterly winds and cool conditions for much of Greenland, and this is reflected in higher snow accumulation for the island, with 1 to 4 feet of excess snowfall (equivalent to 10 to 40 centimeters, or 4 to 12 inches, of excess water accumulation in the form of snow) along the eastern coast. On the Melville Coast (northwest) and far southeastern coast, snowfall was below average by about 5 to 20 centimeters water equivalent, or 6 to 24 inches of snow. 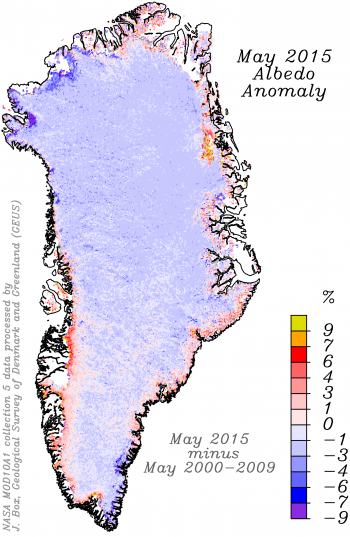 Figure 4. The map shows albedo anomaly for May 2015, relative to the average for May for the 2000 to 2009 period. Red areas near the coast indicate regions where snow has persisted due to cool conditions. In the interior, the general reduction in albedo of Greenland snow observed for the past several years is evident. This is thought to be due to increased soot and dust in Arctic snow cover. However, the trend towards greater decrease in albedo in the northern half, and northwestern areas of Greenland are due in part to sensor degradation in the MODIS sensors over time. Data are from the NASA Moderate Resolution Imaging Spectroradiometer (MODIS), MOD10A1 collection 5.

Albedo (or surface brightness, reflectivity) for the ice sheet has been decreasing significantly for several years, due to the effects of snow grain coarsening due to warmer conditions and possibly from soot from both fires and industrial sources. We have discussed this in earlier posts. However, for May 2015, the cold conditions, late onset of melting and heavy snowfall in the east have created conditions where albedo is higher around much of the perimeter of the ice sheet than has been typical of this century so far. While interior albedo levels are 1 to 4% below the 2000 to 2009 average, a band of the western ice sheet, and much of the eastern near-coastal areas are 3 to 6% brighter than normal. Along the eastern side, much of the brightening is likely due to snow remaining on land and on darker bare ice longer into the spring season than has been typical. A pattern of darkening in the far northwestern areas of the island is in part due to a declining sensitivity of some MODIS channels that is hoped to be corrected in the forthcoming, updated albedo product using MODIS Collection 6 data.

Figure 5. The map at top shows areas of suspected firn aquifer on the Greenland Ice Sheet, based on analysis of airborne radar data from NASA Operation IceBridge. Thin lines indicate the overall flight lines for the 2011, 2012, and 2013 field programs, and colored areas indicate regions where radar data suggest a buried water layer in the firn. The plot at bottom is an example of a radar profile of the upper part of the ice sheet showing a water layer that has been confirmed by drilling into the ice. Variations in the depth of the aquifer are due to variations in the local amount of melting and to surface topography.

In a melt year that is starting more slowly than average and with more snow accumulation, especially in the east of Greenland, scientists are particularly interested in how and when the meltwater will reach the ocean. It is well known that surface melt extent over the Greenland Ice Sheet is expanding, and as a result the ice sheet is losing mass and contributing to sea level rise. When the surface snow or ice melts, it flows into a complex surface and sub-surface hydrologic system that transports the water from the ice sheet to the ocean. The routing of the water, however, is not simple. The Greenland hydrologic system consists of many features common to hydrologic systems on land, such as streams and lakes visible on the surface of the ice sheet, as well as features unique to the ice sheet, such as moulins and subglacial lakes.

A 2011 discovery in southeastern Greenland has added a new component to the Greenland Ice Sheet hydrologic system: a large firn aquifer. A firn aquifer is similar to an aquifer on land where water is stored in a porous stone or earthen layer, such as sandstone or gravel, in the space between the mineral grains. A firn aquifer is a similar kind of storage in coarse porous snow, called firn. Firn is snow that has persisted through a summer melt season. A firn aquifer resembles the cold, slushy drinks sold in stores during summer. Firn aquifers are formed in areas of both strong summer melting and heavy winter snowfall. Meltwater in the summer soaks down into the snow beneath it, warming the snow to the melting point. Heavy winter snows act like a thick blanket, keeping the layer at the freezing point throughout the winter and into the next summer period, when new melting and warmth recharges the soaked layer. Just like an aquifer on land, it is possible to drill into the firn aquifer and pump water out onto the frozen surface.

Why are firn aquifers important? The behavior of the aquifer will determine how much melt water from Greenland reaches the ocean and how quickly, and may have an effect on ice flow speeds. It is currently estimated that the southeastern Greenland firn aquifer stores 140 billion tons of water, equal to approximately 0.4 millimeter (0.016 inches) of sea level rise. The aquifer may be a temporary feature, delaying delivery of meltwater to the ocean until a sudden outflow, or it may be in equilibrium where meltwater recharges the aquifer each summer by the same amount that leaks each year. Another potential effect is that leaking meltwater from the aquifer can reach the base of the ice sheet, and act to partially lift glaciers off the bedrock. This process is well-known in areas where surface lakes and melt streams occur. Each year brings new data and new discoveries for the firn aquifer.

Meltfactor: The ice and climate blog of Dr. Jason Box