Surface melting on the Greenland Ice Sheet in May 2014 proceeded quickly, despite cool conditions over wide areas. We continue to explore recent evidence of lower snow reflectivity, and note its likely impact on snow melt during Greenland’s summer season. 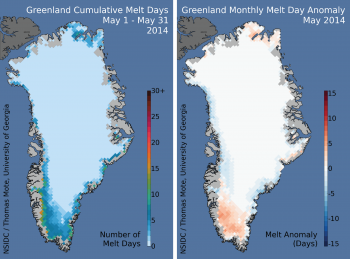 Figure 1. These images show the cumulative days of surface melting (left) and anomalies in the number of melt days (right) for May 2014 (31 days). Anomalies are compared to the period 1981 to 2010. Data are from the Greenland Daily Surface Melt 25km EASE-Grid 2.0 Climate Data Record. About the data

The 2014 melt season began with a moderately fast start in the southernmost part of the Greenland Ice Sheet in May, on smaller, separate ice caps, and on snow-covered land in the far northeastern part of the island. The early pace of melting was below average for the western coast and most of the southeastern coast, but 4 to 8 days ahead of the normal pace in the far southern ice cap area near the capital of Nuuk. 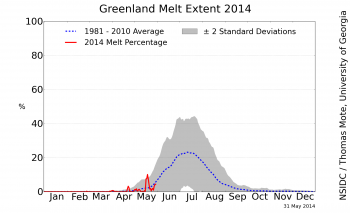 Figure 2a. The graph above shows the daily extent of melt during May 2014 on the Greenland Ice Sheet surface as a percentage. The 1981 to 2010 average is shown by a blue dashed line. The gray area around this average line shows the two standard deviation range of the data. Data are from the Greenland Daily Surface Melt 25km EASE-Grid 2.0 Climate Data Record. About the data 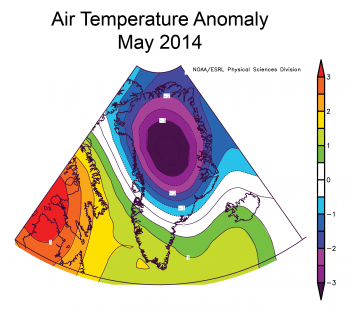 Figure 2b. Mean air temperature for May at the 700 millibar level (about 10,000 feet or 3,200 meters altitude). Temperatures for the month were cool over the majority of Greenland.

Melting extended over about 10% of Greenland during a brief mid-May warm period in the far south, and then climbed again as the month came to a close. As of this writing in mid-June 2014, melting has rapidly expanded to 30% of Greenland’s ice sheet, and at present favors the western and northern Greenland coast after little activity there in May. Greenland’s weather in May was characterized by cool conditions over the northern two-thirds of the island, but in the south, temperatures were approximately 1 degree Celsius warmer than average for the month, relative to the 1981 to 2010 reference period.

Higher temperatures and a period of light easterly and northeasterly winds in mid-May favored a rapid start to the melt season in southern Greenland. The pattern of melting on the ice sheet, and the timing of melt events, agrees well with the MAR model produced by X. Fettweis at Université de Liège. 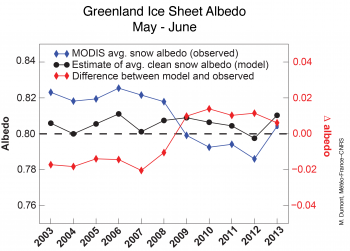 Figure 3. This graph shows the mean albedo (reflectivity fraction) of the Greenland Ice Sheet for areas of the ice sheet with an elevation greater than 2,000 meters above sea level. The blue line and blue diamonds show albedo from satellite data. The black line and dots show albedo from a snow model with clean snow, and its evolution under observed summer May and June temperatures. Also shown is the difference between these estimates (red line and diamonds). Modified from Dumont et al., 2014.

A recent research paper by scientists at Météo-France and other French climate science institutions (Dumont et al., 2014) shows that a significant and abrupt shift in albedo took place in 2009. They hypothesize that the increase is due to a persistent increase in the amount of soot or dust in new-fallen snow over the island. This is based on satellite observations of the albedo by the Moderate-resolution Imaging Spectroradiometer (MODIS). When compared to models of the expected reflectivity of clean snow under the summer conditions, the recent satellite observations show that snow over Greenland is darker than can be explained by warm temperatures and coarser snow grains.

Samples of snow from Greenland in recent years favor the idea that dust is the main cause of the darkening. Other studies confirm that the darkening at high elevation (where the impact of a change in dry new-fallen snow would be significant) is about 2%. For clean new snow, a 2% decrease in reflectivity (for example, from 90% to 88%) represents a 15 to 20 percent increase in energy absorption (from 10% to 12%). With a somewhat darker, less pure incoming snowfall, the amount of energy from the sun that the snow absorbs increases, leading to earlier melt, more pronounced melt run-off, and later re-freezing of the ice sheet surface. 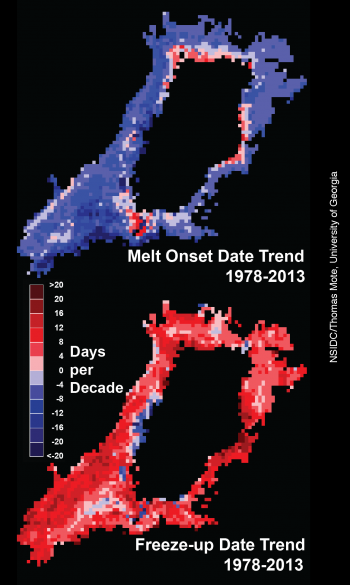 Figure 4. These graphics show trends in how the start (top image) and end (bottom image) of melt season are changing for Greenland. Trends are given in days change per decade. Positive values (red colors) mean that the event is happening later in the year; negative values (blue colors) mean that the event is happening earlier in the year. Data are from the Greenland Daily Surface Melt 25km EASE-Grid 2.0 Climate Data Record. About the data

The trend identified by our colleagues in Figure 3 is underscored when we look at the trend in the date of the beginning of melt (melt onset, top image in Figure 4) and the date that the snow and ice finally re-freeze at the end of the season (freeze-up, lower image in Figure 4). Melt day data from 1978 to 2013 show a pronounced trend toward a longer melt season. Melt onset has started 4 to 12 days earlier per decade over this 35 year period (shown by the blue colors). A few areas at high elevation have shown later onset, perhaps due to increasing accumulation of snow at high elevation in Greenland. The end of the melt season, or freeze-up date, has pushed later into the autumn by 8 to 16 days per decade, particularly along the southwestern coast and east-central areas.

Mote, T., and M. Anderson. 1995. Variations in snowpack melt on the Greenland ice sheet based on passive-microwave measurements. Journal of Glaciology, vol 41, pp 51-60.