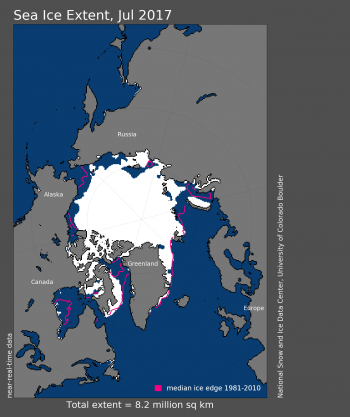 Ice extent was lower than average over most of the Arctic, particularly on the Pacific side where the ice retreated throughout July in the Beaufort, Chukchi, and East Siberian Seas. In the eastern Beaufort Sea on the other hand, extent slightly expanded during July. This may relate to the cyclonic (counterclockwise) pattern of winds favoring the drift of sea ice into the region. 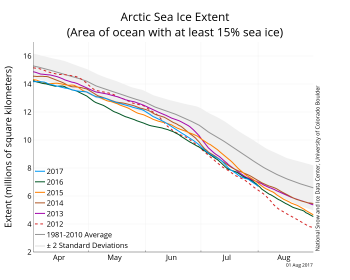 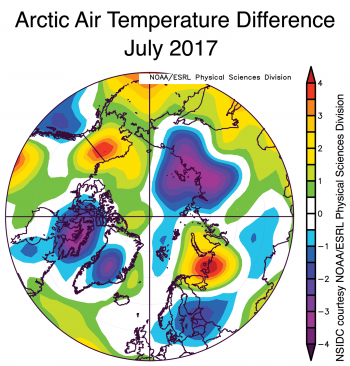 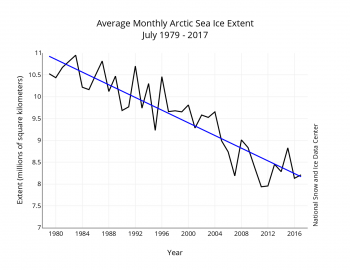 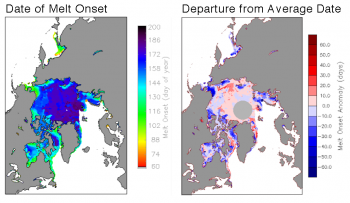 One important influence on the pace of summer sea ice retreat is the timing of the onset of surface melt. Surface melt drops the albedo, allowing more solar radiation to be absorbed at the surface. The onset of surface melt in 2017 was quite early in the Chukchi and Eastern Beaufort Seas—as much as 35 days earlier than the 1981 to 2010 average. Early melt was also seen in the Kara Sea, Baffin Bay, and Canadian Arctic Archipelago (10 to 20 days earlier than average). However, over a large portion of the Arctic Ocean’s central ice pack, melt onset was a few days later than average. Melt onset was up to ten days later than average in the polar areas at the northern extents of the Beaufort and East Siberian Seas. The spatial pattern in the timing of melt onset reflects the combination of the warm winter and early spring conditions along the edge of the pack on the Pacific side, very warm winter conditions in the Barents and Kara Sea areas, and relatively cool late spring to early summer conditions over the central Arctic Ocean.

Sea ice predictions for the 2017 minimum 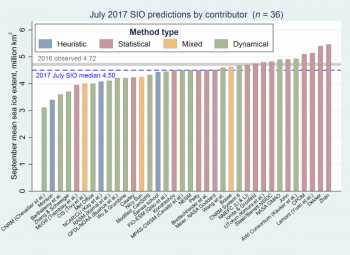 Figure 5. This chart summarizes the 2017 summer September minimum forecasts from 36 different models and approaches to predicting the evolution of the Arctic pack.

A report released by the Sea Ice Prediction Network (SIPN), an activity of the Arctic Research Council of the United States (ARCUS), compiled 36 forecasts of September average sea ice extent that were submitted during July. Additionally, SIPN produces estimates for sea ice extent in the Alaska region and, new this year, for the Antarctic sea ice maximum (not shown). The September Arctic extent forecasts range from a new record low of 3.1 million square kilometers (1.2 million square miles) to an eleventh lowest extent of 5.5 million square kilometers (2.1 million square miles). The median of the estimates is slightly below the September 2016 value, currently the fifth lowest. A variety of methods are used to make these forecasts, ranging from coupled ice-ocean-atmospheric models to statistical approaches and heuristic guesses. NSIDC scientists Julienne Stroeve, Walt Meier, Andrew Barrett, Mark Serreze, and the late Drew Slater have regularly contributed to several separate estimations for the SIPN.

Sea ice retreat may be changing the AMOC

In the far northern Atlantic, warm water flowing northward from the tropics is cooled by the atmosphere, becomes denser, and eventually sinks to great depths. The descending water is key in driving a sub-surface and surface ocean circulation system called the Atlantic Meridional Overturning Circulation (AMOC), which is part of the global ocean conveyor belt of heat and salinity. Where the Atlantic water sinks has a very important effect on the climate of Northern Europe; the heat that the ocean loses to the atmosphere is what keeps Northern Europe quite warm relative to its latitude. For example, Amsterdam is at the same latitude as Winnipeg, Canada, but experiences much warmer winters.

Based on a recent modeling study, Florian Sévellec and colleagues propose that the ongoing loss of Arctic sea ice may disrupt the AMOC. The sea ice loss leads to a freshening of the northern North Atlantic and stronger heat absorption at the surface. This means that waters in the northern North Atlantic are less dense than they used to be, which has the effect of providing a cap, or lid, that may inhibit the northward flow of warm waters at the surface and the eventual sinking of these waters. The authors suggest that the Arctic sea ice decline may help to explain observations suggesting that the AMOC may be slowing down, and why there is a regional minimum in warming (sometimes called the Warming Hole) over the subpolar North Atlantic.