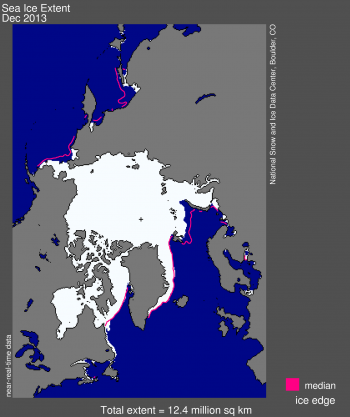 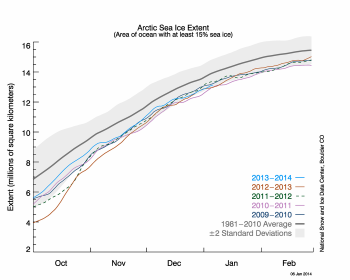 Similar to November, the early part of December was dominated by a positive Arctic Oscillation pattern, but this shifted to near-neutral conditions by the end of the month. The Icelandic low, covering much of the northern North Atlantic Ocean, was stronger than average, and pressures were higher than average over the Bering Sea and Alaska. Air temperatures at the 925 hPa level (about 3,000 feet above the surface) were above average for the month over most of the Arctic Ocean; unusual warmth was most notable over far eastern Siberia (6 degrees Celsius or 11 degrees Fahrenheit above average). Over the central Arctic Ocean, temperatures at the 925 hPa level were 2 to 5 degrees Celsius or 4 to 9 degrees Fahrenheit above average. By sharp contrast, relatively cool conditions prevailed over northern North America. Temperatures in areas such as the Yukon Territory were 6 degrees Celsius (10 degrees Fahrenheit) or more below average. 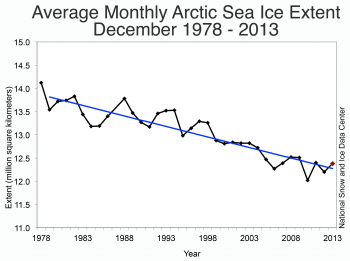 Continuing a recent pattern, ice extent remained below average over the northern North Atlantic throughout the year. Sea ice retreat began unusually early in the northern Barents and Kara seas. By comparison, sea ice retreated from the Alaskan coast later than in recent years. This occurred despite unusually active late winter fracturing of the ice pack in the region. The fraction of the Arctic sea ice cover comprised of old ice continued to decline.

Summer weather patterns during 2013 were very different from those seen in 2007 to 2012. Overall it was considerably cooler. There was little evidence of the summer dipole pattern seen in recent years. Relatively cool conditions also characterized the Greenland Ice Sheet, and surface melt was much less extensive than for 2012. The year 2013 reminds us that natural climate variability is very strong in the Arctic.

In Antarctica, sea ice extent has been well above average, setting record extents for both the summer minimum and winter maximum. For a long period over the winter and spring months, ice extent was at a record for the modern satellite era. While remarkable, it is important to note that trends in Antarctic sea ice extent remain small (1 to 4%) and are statistically significant relative to inter-annual variation only for the late autumn, winter, and early spring months. Early satellite records (the Nimbus satellite series in 1964, 1966, and 1969) provide further evidence that Antarctic sea ice extent is highly variable; the three years covered by Nimbus show September extents that were both higher and lower than seen in the modern continuous, calibrated satellite record.

Heavy Antarctic sea ice conditions along the Wilkes Land Coast near France’s Dumont D’Urville Station and persistent onshore to easterly winds have trapped a Russian ice-hardened vessel conducting a mixed science and tourism cruise. The cruise by the Akademik Shokalskiy was attempting to re-measure some of the climate, ice, and ocean conditions made by the Aurora , Sir David Mawson’s research vessel on his 1911 to 1913 expedition to the region. The region is often swept clear of ice by this time in the summer season by strong katabatic offshore winds; Cape Denison and Commonwealth Bay (near to the stuck ship’s location) are recognized as some of the windiest places on Earth. However, December was marked by long periods of northeasterly airflow, pushing the sea ice against the coast, and piling up the thinner flows into a nearly impenetrable mass.

The ship’s entrapment, with limited supplies for the larger science and expedition group, led to a complex multi-ship rescue executed in early January. However, several of the rescue icebreakers are having trouble with the ice conditions. As this summary is written, the U.S. Coast Guard icebreaker Polar Star is planning an attempt to help free the new Chinese research icebreaker Snow Dragon. The Polar Star is among the most powerful icebreakers ever built.