Arctic sea ice extent declined at an approximately average rate through April. While the Arctic Oscillation was in its negative phase for most of winter, in mid April it turned positive. This helped to bring in warm air over Eurasia, although air temperatures over the sea ice cover remain below freezing. 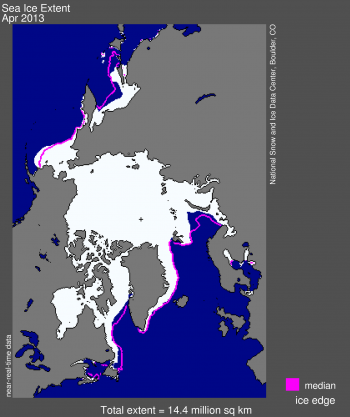 A large area of open water has started to form around Franz Josef Land and north of Svalbard. Polynyas are also appearing in the Kara and East Siberian seas.

The walrus and whaling season has begun in Arctic Alaska. The Study of Environmental Arctic Change (SEARCH) Sea Ice for Walrus Outlook (SIWO) is now providing weekly sea ice outlooks as a resource for Alaska Native subsistence hunters, coastal communities, and others interested in sea ice and walrus or whales. With spring sea ice conditions being thinner and less predictable than in the past due to warming in the Arctic, the sea ice outlook helps hunters plan their activities. 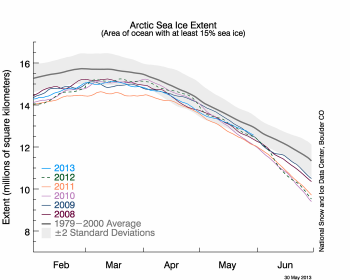 Through the month of April, the Arctic lost 1.5 million square kilometers of ice (444,000 square miles), which is slightly higher than the average for the month. Air temperatures at the 925 hPa level (approximately 3,000 feet above sea level) in April were 5 to 7 degrees Celsius (9 to 13 degrees Fahrenheit) higher than average in the East Siberian Sea and 3 to 5 degrees Celsius (5 to 9 degress Fahrenheit) higher than average in the Kara Sea. Temperatures were 3 to 5 degrees Celsius (5 to 9 degrees Fahrenheit) below average over Alaska. The dominant feature of the Arctic sea level pressure field for April 2013 was unusually high pressure over Alaska and Siberia and below average pressure over the Kara and Barents seas.  During the middle of the month, the Arctic Oscillation switched from a negative to a positive phase, with anomalously high sea level pressure over Alaska combined with below average pressure over Greenland and the North Atlantic. This brought in warm air over Eurasia, and above average air temperatures throughout the eastern Arctic.

The reductions in April ice extent this year and over the satellite record are predominantly due to reduced ice cover in the Kara and Barents seas. In contrast, ice extent continues to remain slightly above normal in the Bering Sea. 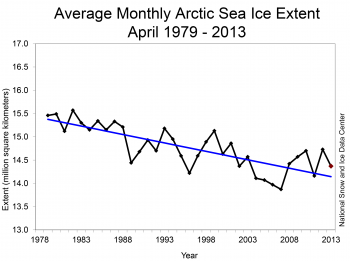 Average Arctic sea ice extent for April 2013 was the seventh lowest for the month in the satellite record. Through 2013, the linear rate of decline for April ice extent is -2.3 percent per decade relative to the 1979 to 2000 average. 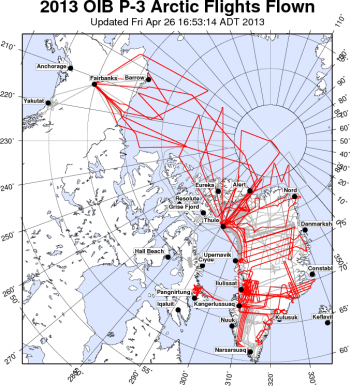 Figure 4. This chart shows the flight tracks of IceBridge P-3 aircraft flights over the Arctic through April 26, 2013.

On 20 March 2013, NASA resumed Operation IceBridge aircraft missions over the Arctic. The IceBridge mission was initiated in 2009 to collect airborne measurements of sea ice and ice sheet thickness, to bridge the gap between NASA’s Ice, Cloud and Land Elevation Satellite (ICESat) and the upcoming ICESat-2 mission. This spring, areas not extensively covered in previous campaigns were a focus as well as flight tracks corresponding to the European CryoSat-2 satellite. Several successful flights were flown across the Beaufort and Chukchi seas in March and early April while the aircraft was stationed in Fairbanks, Alaska and Greenland’s Thule Air Base. Afterwards NASA’s P-3B aircraft was moved to Kangerlussuaq, Greenland for flights over the ice sheet. Towards the end of April, the aircraft was once again stationed in Thule, allowing additional ice sheet flights over the north central part of Greenland ice sheet and the resumption of sea ice flights over large portions of Arctic sea ice. The latter included a repeat of a 2012 flight line aimed at sampling a large region of the Canada Basin. This year’s Arctic IceBridge mission ended on 2 May, with the successful completion of ten sea ice and fifteen ice sheet flights. 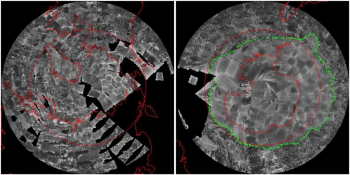 We dedicate this post to Dr. Katharine Giles, who was tragically killed cycling to work on 8 April 2013. Together with Dr. Laxon, Katherine Giles worked to retrieve sea ice thickness from satellite radar altimeter data. In 2007 she was the first to show that this data could also be used to show how winds affect the newly exposed Arctic Ocean. Since Dr. Laxon’s death earlier this year, Katharine worked hard to continue his legacy and supervise his students. We have lost yet another talented scientist and a great friend.