Arctic sea ice continued its winter expansion, although ice growth slowed briefly in early November. The slowdown may have been related to a strong Arctic storm that tracked from the Bering Sea into the Beaufort and Chukchi seas. In the Southern Hemisphere, Antarctic sea ice is tracking near average for this time of year. 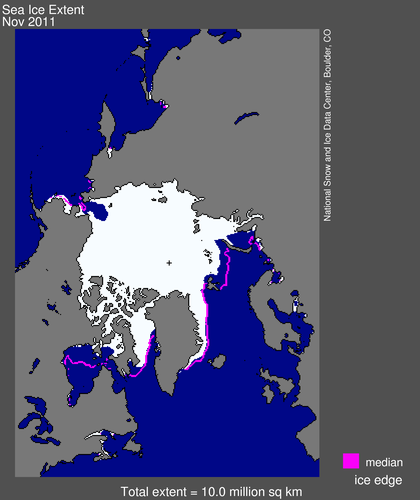 At the end of November, ice extent remained below the 1979 to 2000 average in the Chukchi, Barents and Kara seas, and Hudson Bay was still nearly ice free. Ice extent was near average in the East Greenland and the Bering seas. These ice conditions may be connected to a strong positive phase of the Arctic Oscillation, which began during the last week of November. A positive Arctic Oscillation tends to help move ice out of Fram Strait and into the North Atlantic. 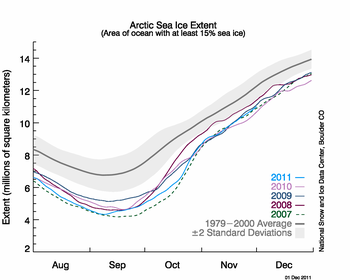 Figure 2. The graph above shows daily Arctic sea ice extent as of December 1, 2011, along with the ice extents for the previous four years. 2011 is shown in light blue, 2010 is in pink, 2009 in dark blue, 2008 is in purple, and 2007, the year with the record low minimum, is dashed green. The gray area around the average line shows the two standard deviation range of the data. Sea Ice Index data. 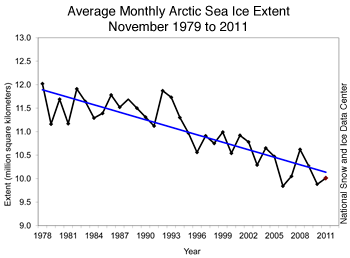 November 2011 compared to past years 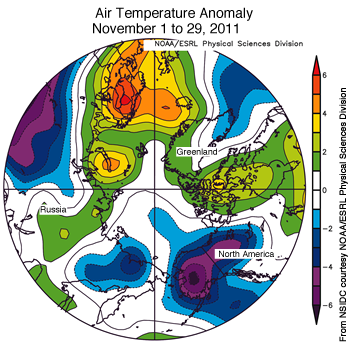 Figure 4. This map of air temperature anomalies at the 925 hPa level (approximately 3000 feet) for November 2011 shows near-normal or lower-than-average temperatures over much of the Arctic basin, while air
temperatures over the Kara and Barents Seas and Greenland were warmer than normal.—Credit: NSIDC courtesy NOAA/ESRL PSD
High-resolution image

Atmospheric conditions and an Arctic storm

Low sea ice extent this summer may be contributing to warmer November temperatures and lower November ice extents in some areas. In recent years, low sea ice extent in the summer has been linked to unusually warm autumn air temperatures, resulting from the larger areas of open water that absorb more heat during the summer. This heat must escape back to the atmosphere in the fall, before the ocean can freeze over. This escaping heat contributes to warmer-than-average conditions, which have been most apparent in October but may also extend into November.

Lower than average temperatures in the Beaufort and Bering seas may be in part related to a strong low-pressure system that developed early in the month. In early November, a low-pressure system moved up from the Bering Sea into the Arctic, bringing strong winds and flooding to coastal villages in western Alaska. With a core pressure as low as 947 millibars, it was the strongest November storm to hit northwest Alaska since 1974. Much of the area affected by the storm was in areas that are typically ice-free, so the lack of sea ice probably did not play a direct role in the damage. For more information, see the Icelights article: An Arctic Hurricane? 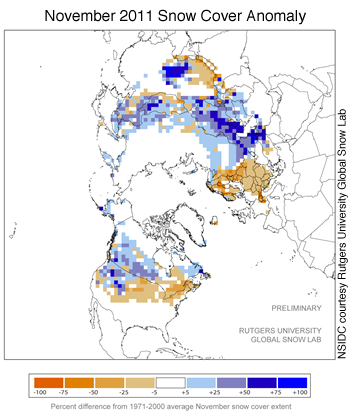 Figure 5. This map shows snow cover this November, compared to the 1971 to 2000 average. Areas in orange and red had lower snow cover than usual, while areas in blue had more snow than normal during November.

The positive phase of the Arctic Oscillation also tends to be associated with unusually warm conditions over Scandinavia. According to Sweden’s meteorological office, the country’s average temperature for the month of November so far was 7 degrees Celsius (12.6 degrees Fahrenheit) above average. Typically by November, much of Scandinavia is already covered with snow, but maps from the Rutgers University Global Snow Lab show that snow cover levels were anomalously low over Scandinavia and northwestern Europe during November. Below-normal snow conditions were also evident over most of the continental United States, except for the northern Rockies.

Along with sea ice, change in snow cover can be an indicator of climate change. Higher air temperatures have resulted in a decline in snow cover in the spring, but in fall, the signal is more mixed. Some scientists also suspect there may be a link between early season high-latitude snow cover and winter weather patterns in the mid-latitudes. Judah Cohen and Justin Jones of Atmospheric and Environmental Research in Massachusetts have examined a potential link and suggest that this information could be used to improve winter forecasts. However, this research is still preliminary. 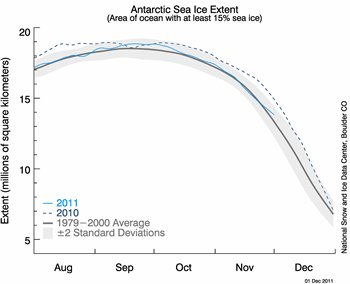 Figure 6. This graph shows Antarctic sea ice extent as of December 1, 2011. This year’s sea ice extent is shown in light blue, and 2010 is shown in dark blue. The gray area around the average line shows the two standard deviation range of the data. Sea Ice Index data.

A look at Antarctica

Arctic Sea Ice News & Analysis generally focuses on sea ice conditions in the Arctic, since these conditions are closely tied to climate and weather in the Northern Hemisphere. A seasonal cover of sea ice also surrounds the continent of Antarctica. Since reaching its seasonal maximum in September, Antarctic sea ice has been near average in recent months. In November, Antarctic extent was 16.15 million square kilometers (6.24 million square miles), 87,000 square kilometers (33,600 square miles) less than the 1979 to 2000 average. In recent years, the sea ice cover that surrounds the Antarctic continent has been higher than average, even reaching near-record highs.

NOAA has released their annual Arctic Report Card, an annual compilation of scientific observations of the changing Arctic region. NSIDC scientist Walt Meier contributed to the sea ice section of the report.