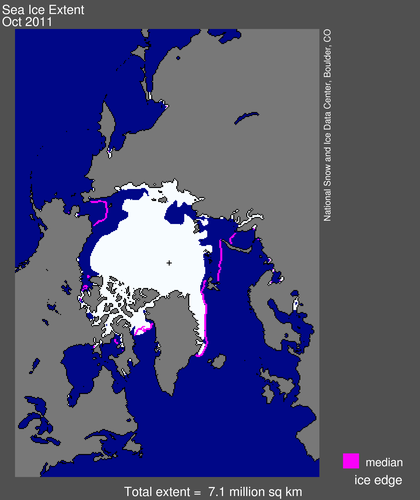 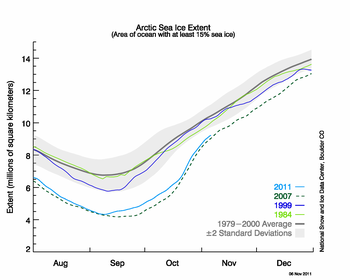 Figure 2. The graph above shows daily Arctic sea ice extent as of November 6, 2011, along with the lowest ice extents in the preceding decades, 1984 and 1999. 2011 is shown in light blue. 2007, the year with the record low minimum, is dashed green. Purple indicates 1999 and light green shows 1984. The gray area around the average line shows the two standard deviation range of the data. Sea Ice Index data. —Credit: National Snow and Ice Data Center
High-resolution image 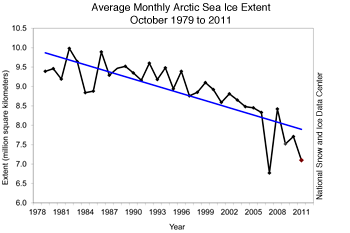 October 2011 compared to past years 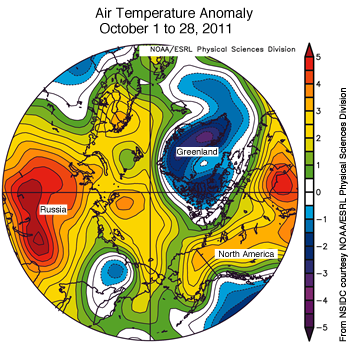 In recent years, low sea ice extent in the summer has been linked to unusually warm temperatures at the surface of the Arctic Ocean in the fall. This pattern appeared yet again this fall.

Air temperatures over most of the Arctic Ocean for October 2011 ranged from 1 to 4 degrees Celsius (1.8 to 7.2 degrees Fahrenheit) above average, measured at the 925 millibar level, about 1,000 meters or 3,000 feet above the surface. However, over the eastern Canadian Arctic and Greenland, temperatures were as much as 3 degrees Celsius (5.4 degrees Fahrenheit) below average.

These temperature anomalies in part reflect a pattern of above-average sea level pressure centered over the northern Beaufort Sea, and lower than average sea level pressure extending across northern Eurasia. This pattern is linked to persistence of the positive phase of the Arctic Oscillation through most of the month. These pressure and temperature anomalies tend to bring in heat from the south, warming the Eurasian coast, but they also lead to cold northerly winds over the eastern Canadian Arctic Archipelago. However, along the Siberian coast and in the Beaufort and Chukchi seas, warmer temperatures came primarily from the remaining areas of open water in the region, as heat escaped from the water. These effects are more strongly apparent in the surface air temperatures: average October temperatures in the region were 5 to 8 degrees Celsius (9.0 to 14.4 degrees Fahrenheit) above average.

Declining sea ice in the Arctic has led to increasing erosion rates along the coast of the Beaufort Sea over the past fifty years, according to a new study led by Irina Overeem of the University of Colorado Institute for Arctic and Alpine Research (INSTAAR). Their study used a wave model driven by sea ice position and wind data.

With a longer open water season, ocean water warms more and waves eat away at the coastline. The sediments comprising the coastal bluffs are locked together by permafrost—hard frozen ground with a concrete-like consistency. As the waves lap at the permafrost, they also help to thaw it, making the ground much more vulnerable to erosion.