Arctic sea ice extent averaged for July was the second lowest in the satellite record, after 2007. After a slowdown in the rate of ice loss, the old, thick ice that moved into the southern Beaufort Sea last winter is beginning to melt out. 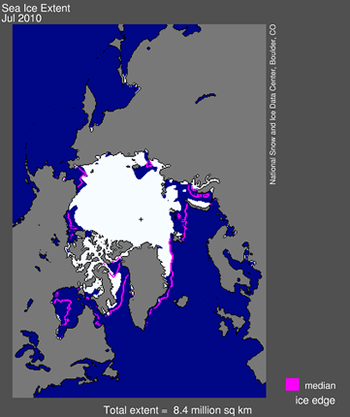 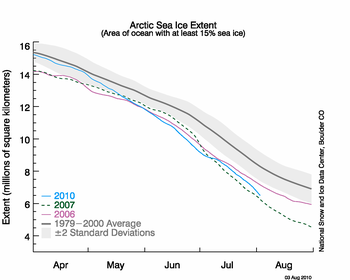 Cool, stormy weather this July has made it less likely that the upcoming 2010 sea ice minimum will set a new record. It would take a very unusual set of conditions in August to create a new record low.

July 2010 compared to past years

Ice extent for July 2010 was the second lowest in the satellite record for the month. The linear rate of decline of July ice extent over the period 1979 to 2010 is now 6.4% per decade.

Figure 4. This map of ice age for the end of July, 2010, shows a region of open water north of Alaska, where old, thick ice has melted out. —Credit: NSIDC courtesy J. Maslanik and C. Fowler, CU Boulder
High-resolution image

This past winter’s negative phase of the Arctic Oscillation transported old ice (four, five, and more years old) from an area north of the Canadian Archipelago. The ice was flushed southwards and westward into the Beaufort and Chukchi seas, as noted in our April post. Ice age data show that back in the 1970s and 1980s, old ice drifting into the Beaufort Sea would generally survive the summer melt season. However, the old, thick ice that moved into this region is now beginning to melt out, which could further deplete the Arctic’s remaining store of old, thick ice. The loss of thick ice has been implicated as a major cause of the very low September sea ice minima observed in recent years. 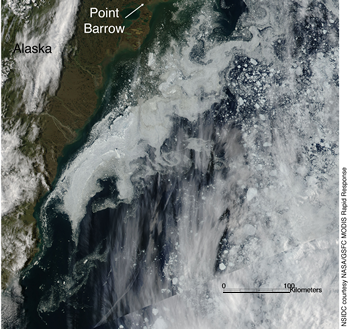 Figure 5. This image from NASA’s MODIS sensor on the Aqua satellite on July 25, 2010 shows an individual floe of old ice, which broke away from the main ice pack and is melting away.—Credit: National Snow and Ice Data Center courtesy NASA/GSFC MODIS Rapid Response
High-resolution image

High-resolution (250-meter) visible imagery from the NASA Moderate Resolution Imaging Spectroradiometer (MODIS) sensor vividly shows the loss of the old, thick ice. A region of mostly old ice has become separated from the main pack along the north coast of Alaska, east of Point Barrow, where it has begun to melt in the warm shallow shelf waters. While cloud cover obscures some areas, it is clear that the old ice floe has broken up into many smaller floes. Whether this old ice will completely melt out by the end of summer will depend to some extent on weather conditions. However, smaller floes melt more easily than consolidated ice. This behavior is becoming more typical of the ice pack as the ice thins.