In May, Arctic air temperatures remained above average, and sea ice extent declined at a rapid pace. At the end of the month, extent fell near the level recorded in 2006, the lowest in the satellite record for the end of May. Analysis from scientists at the University of Washington suggests that ice volume has continued to decline compared to recent years. However, it is too soon to say whether Arctic ice extent will reach another record low this summer—that will depend on the weather and wind conditions over the next few months. 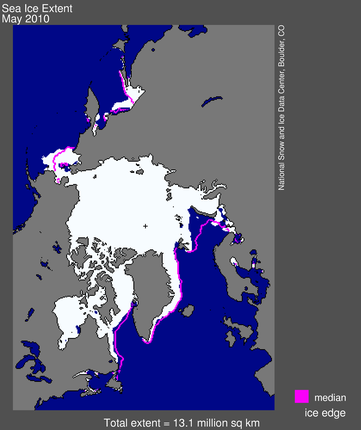 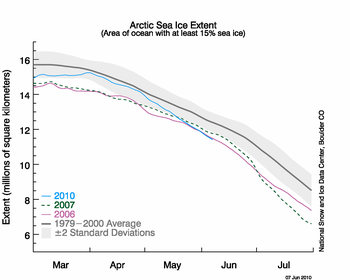 As we noted in our May post, several regions of the Arctic experienced a late-season spurt in ice growth. As a result, ice extent reached its seasonal maximum much later than average, and in turn the melt season began almost a month later than average. As ice began to decline in April, the rate was close to the average for that time of year.

In sharp contrast, ice extent declined rapidly during the month of May. Much of the ice loss occurred in the Bering Sea and the Sea of Okhotsk, indicating that the ice in these areas was thin and susceptible to melt. Many polynyas, areas of open water in the ice pack, opened up in the regions north of Alaska, in the Canadian Arctic Islands, and in the Kara and Barents and Laptev seas.

The polynyas are clearly visible in high-resolution passive microwave images from the Advanced Microwave Sounding Radiometer (AMSR-E) aboard NASA’s Aqua satellite. What do current ice conditions mean for the minimum ice extent this fall? It is still too soon to say: although ice extent at present is relatively low, the amount of ice that survives the summer melt season will be largely determined by the wind and weather conditions over the next few months. 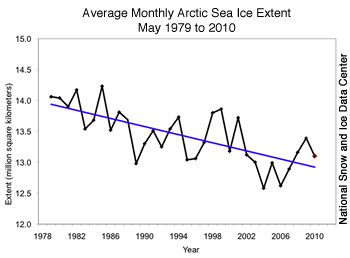 Figure 3. Monthly May ice extent for 1979 to 2010 shows a decline of 2.4% per decade. —Credit: National Snow and Ice Data Center
High-resolution image

May 2010 compared to past years 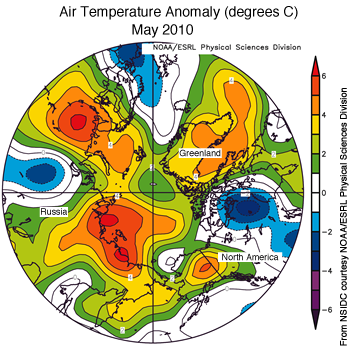 Figure 4. This map of air temperature anomalies for May 2010, at the 925 millibar level (roughly 1,000 meters or 3,000 feet above the surface), shows warmer-than-usual conditions over much of the Arctic Ocean, especially along coastal Siberia. Areas in orange and red correspond to positive (warm) anomalies. Areas in blue and purple correspond to negative (cool) anomalies. —Credit: National Snow and Ice Data Center courtesy NOAA/ESRL Physical Sciences Division
High-resolution image

Persistent warmth in the Arctic

Arctic air temperatures averaged for May were above normal, continuing the temperature trend that has persisted since last winter. Temperatures were 2 to 5 degrees Celsius (4 to 9 degrees Fahrenheit) above average across much of the Arctic Ocean. A strong anticyclone centered over the Beaufort Sea produced southerly winds along the shores of Siberia (in the Laptev and East Siberian seas), resulting in warmer-than-average temperatures in this area. The Canadian Arctic Islands were an exception to the general trend, with temperatures slightly cooler than average over much of the region. 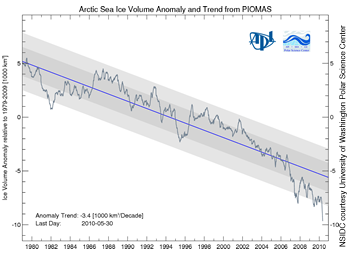 Figure 5. The chart above, from the University of Washington Pan-Arctic Ice Ocean Modeling and Assimilation System, shows anomalies in ice volume by month. Ice volume is expressed in units of 1000 cubic kilometers (240 cubic miles), and is computed relative to averages for the period 1979 to 2009. —Credit: National Snow and Ice Data Center courtesy University of Washington
High-resolution image

Ice extent measurements provide a long-term view of the state of Arctic sea ice, but they only show the ice surface. Total ice volume is critical to the complete picture of sea ice decline. Numerous studies indicate that sea ice thickness and volume have declined along with ice extent; unfortunately, there are no continuous, Arctic-wide measurements of sea ice volume. To fill that gap, scientists at the University of Washington have developed regularly updated estimates of ice volume, using a model called the Pan Arctic Ice Ocean Modeling and Assimilation System (PIOMAS).

The SEARCH Sea Ice Outlook, an international, community-wide discussion of the upcoming September Arctic sea ice minimum, is slated to be published in June 2010.

Gridded ICESat data are now available from the NASA Jet Propulsion Laboratory. This data provide an estimate of sea ice thickness based on elevation measurements, from 2004 to 2008.