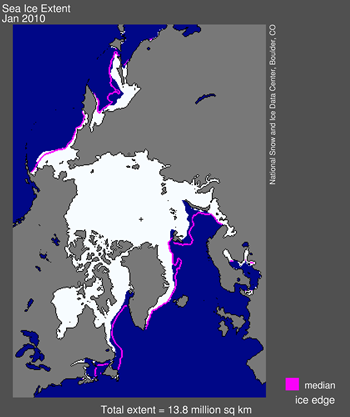 Ice extent remained below normal over much of the Atlantic sector of the Arctic, including the Barents Sea, part of the East Greenland Sea, and in Davis Strait. The only region with above-average ice extent was on the Pacific side of the Bering Sea. 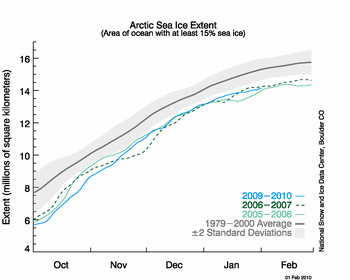 During January 2010, ice extent grew at an average of 34,000 square kilometers (13,000 square miles) per day. Sea ice extent increased at a fairly steady rate in the early part of the month and then slowed towards the end of January. A brief slowdown in ice growth is not unusual during winter. 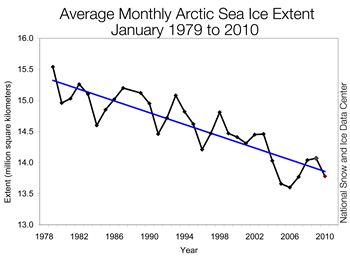 January 2010 compared to past years

While Arctic sea ice extent has declined in all seasons, the downward trends in winter ice extent are much smaller than in summer. Polar darkness and low temperatures mean that the ice generally refreezes to about the same boundaries each winter. Ice extent averaged for January 2010 was the fourth lowest for the month since the beginning of satellite records, and 180,000 square kilometers (69,000 square miles) higher than the record low January extent observed in 2006. The linear rate of decline for January is now 3.2% per decade. 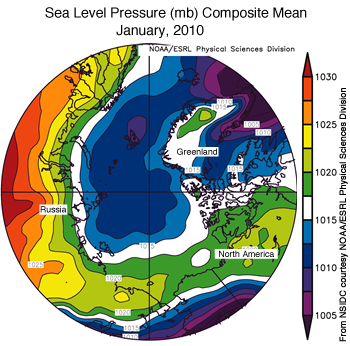 A shift in atmospheric circulation 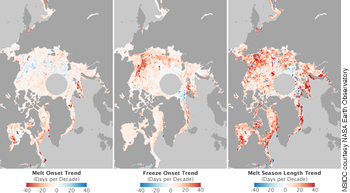 Figure 5. This map of the Arctic shows how earlier melt onset (left) and later freeze onset (middle) have contributed to a longer melt season (right), over the past 30 years.—Credit: NASA Earth Observatory image by Robert Simmon, based on data from Jeffrey Miller and Thorsten Markus, NASA GSFC.
High-resolution image

Analysis of data from the last three decades shows that the summer Arctic sea ice melt season now lasts nearly a month longer than it did in the 1980s. A later start of freeze-up and an earlier start to the melt season both contribute to the change. A recent paper by Thorsten Markus at NASA Goddard Space Flight Center suggests that the later freeze-up is the dominant factor lengthening the melt season. The analysis shows that, on average, autumn freeze-up starts nearly four days later each decade. Extensive open water at the end of the summer melt season, combined with warmer autumns, delay the autumn freeze-up. The larger expanses of open water absorb more solar energy, and before ice can form again, that heat must be released back to the atmosphere. This trend is most pronounced in the Beaufort, Chukchi and Laptev seas.