Sea ice extent grew throughout October, as the temperature dropped and darkness returned to the Arctic. However, a period of relatively slow ice growth early in the month kept the average ice extent low—October 2009 had the second-lowest ice extent for the month over the 1979 to 2009 period. 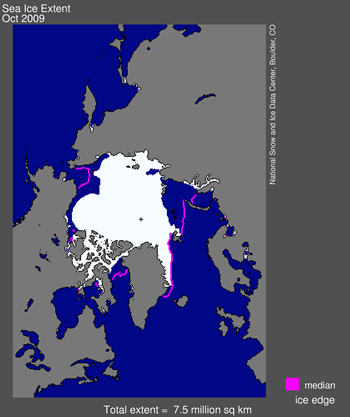 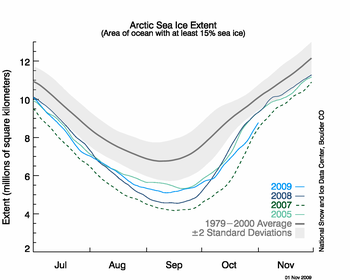 In the fall, cold conditions and polar darkness return to the Arctic. As is typical for this time of year, ice growth was brisk in October, growing at an average 96,000 square kilometers per day (37,000 square miles per day).

However, the growth rate slowed for a time in early October, coinciding with strong winds from the south over central Siberia. The winds helped prevent ice from forming along the Siberian coast. At the end of the month, extensive areas of open water regions were still present in the northernmost North Atlantic, and north of Alaska. The ice edge was north of both Svalbard and Franz Josef Land. 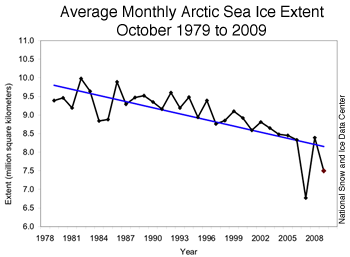 October 2009 compared to past years 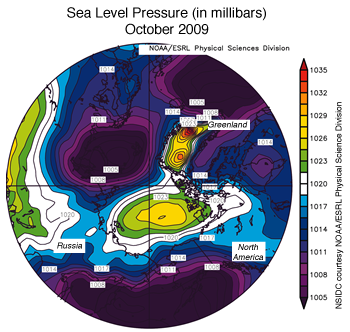 For most of the month, a high-pressure system sat over the Beaufort Sea, while unusually low pressure dominated the Barents Sea. In accord with Buys Ballot’s Law, the area between the two pressure centers saw strong, warm winds blowing from the south. This wind pattern, in conjunction with extensive open water, led to a mean monthly temperature as high as 6 degrees Celsius (11 degrees Fahrenheit) above average in the region between the high and low pressure anomalies (October air temperature map). 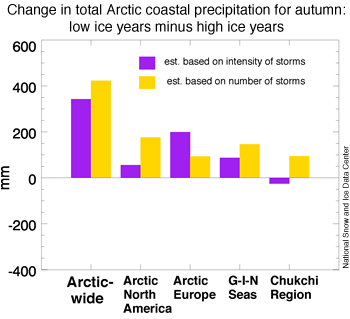 A new study by Ian Simmonds and Kevin Keay, at the University of Melbourne in Australia, finds connections between the decline in September sea ice extent and the characteristics of Arctic storms. As ice extent has decreased, Arctic storms have shown a tendency to become more intense, especially in the last few years. The study suggests that low September ice extent, with extensive areas of open water, provides more energy to autumn storms, allowing them to become stronger. The stronger storms also help to break up the ice.

Related research at NSIDC reveals that when September ice extent is unusually low, precipitation linked to Arctic storms tends to be greater than when September ice extent is unusually high (Figure 5). Climate scientists are interested in these studies, because increased autumn snowfall could have effects on both sea ice and permafrost in the Arctic.