The Arctic is now in the midst of the summer melt season. Through most of June, ice extent tracked below the 1979 to 2000 average, and slightly above the levels recorded during June 2007. Warm temperatures and southerly winds led to quickly declining ice concentration in some regions, such as the Laptev Sea. 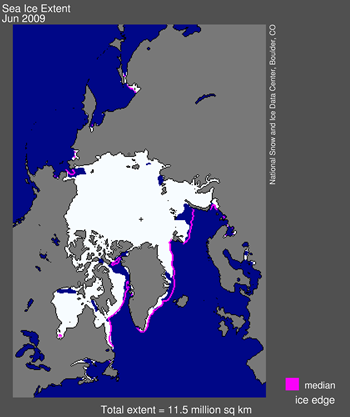 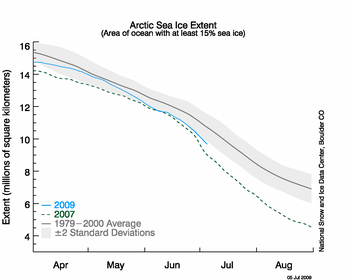 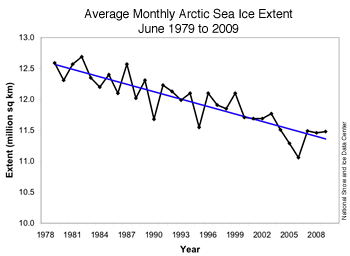 June 2009 compared to past Junes 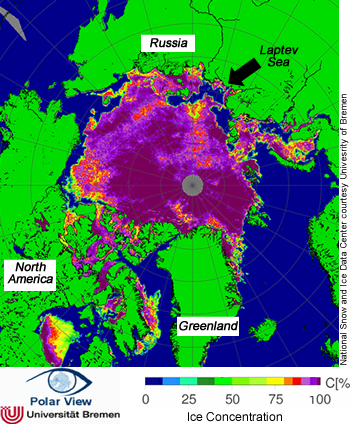 Figure 4. The map of sea ice concentration from AMSR-E from July 5, 2009 shows low ice concentrations in the Laptev Sea, where atmospheric temperatures have been particularly warm in the month of June. NASA AMSR-E data.—Credit: From National Snow and Ice Data Center courtesy IUP, University of Bremen, Germany
High-resolution image

In June, the Arctic saw warm temperatures over the Laptev Sea and the northern Beaufort Sea, while the Atlantic sector of the Arctic was slightly cooler than normal. The warm temperatures in the Laptev Sea corresponded to quickly declining ice concentrations in the area. The decline can be seen in sea ice concentration analyses produced at the University of Bremen using NASA Advanced Microwave Sounding Radiometer-Earth Observing System (AMSR-E) data. We expect this region to become largely ice-free in the next few weeks. 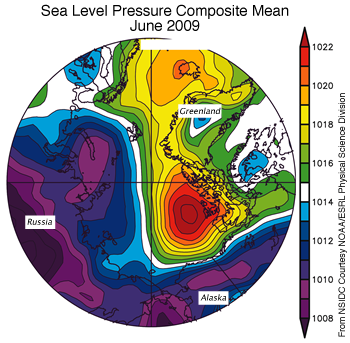 The warmth in the Laptev Sea is consistent with a pattern of southerly winds in these areas, which can be linked to the area of low atmospheric pressure centered just north of Novaya Zemlya Island. Note also the strong high-pressure cell (an anticyclone) over the northern Beaufort Sea.

This contrast between high and low pressure is broadly similar to the atmospheric circulation pattern that set up in 2007. In 2007, that pattern contributed to a significantly accelerated decline in ice extent during July, and a record minimum low in September. Will the same acceleration in ice melt occur this year? If so, a new record low minimum extent becomes more likely. So far, an acceleration has not been observed. As July progresses, the Arctic sun gets lower on the horizon, incoming solar energy decreases, and the chances of such a rapid decline become less likely.