Arctic sea ice extent continued to increase through the month of February, as it approaches its annual maximum. Ice extent averaged for February 2009 is the fourth-lowest February in the satellite record. From February 18 to 22, ice extent declined slightly, primarily because of weather conditions off the coast of Alaska; ice extent then rebounded. 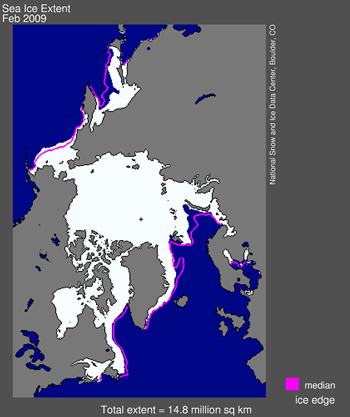 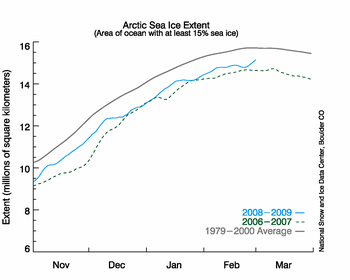 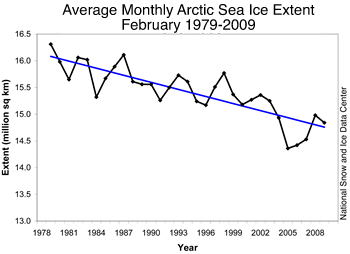 February 2009 compared to past Februaries 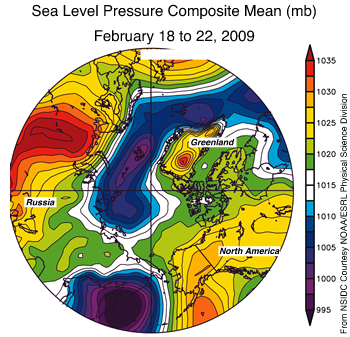 Figure 4. The map of sea level pressure (in millibars) over the Arctic, averaged for February 18 to 22, 2009, shows the pressure systems that caused warm southerly winds to compact and melt the ice in the Bering Sea and Gulf of Alaska.—Credit: From National Snow and Ice Data Center courtesy NOAA/ESRL Physical Sciences Laboratory
High-resolution image

The temporary decline in ice extent from February 18 to 22 illustrates the sensitivity of Arctic sea ice extent to transient weather conditions. Conditions along southern boundary of the ice cover, such as in the Bering Sea, are typically just barely cold enough for ice to exist, and the ice there can quickly expand or retreat in response to changes in temperature and winds.

The decline in mid-February appears to have been caused by the combination of low pressure centered in the western Bering Sea and high pressure centered in the western Gulf of Alaska. This weather pattern caused warm, southerly winds between the low and high pressure cells, which pushed the ice edge to the north and promoted melt. Air temperatures in the region at the 925 millibar level (approximately 915 meters [3,000 feet] above the surface) were up to 8°C (14°F) above average.