As is typical during mid-winter, sea ice extent increased overall in January; maximum monthly extent is expected in March. However, January ice extent remained well below normal compared to the long-term record. Ice extent averaged for January 2009 is the sixth lowest January in the satellite record. Also of note is that from January 15 to 26, ice extent saw essentially no increase; an unusual wind pattern appears to have been the cause. 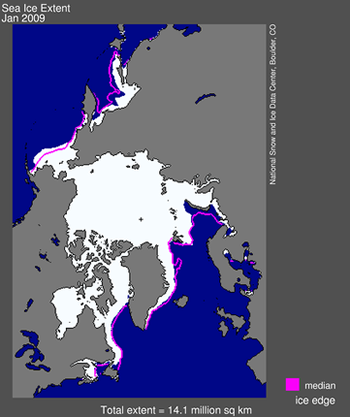 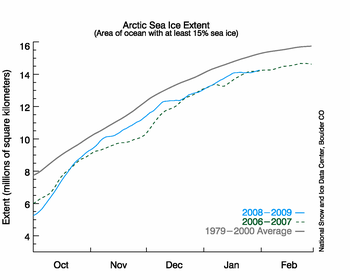 While ice extent climbed through the month of January as a whole, the period from January 15 to 26 saw almost no increase in ice extent, appearing as a flattening in the line graph. Extent during this pause remained fairly steady at around 14.0 million square kilometers (5.4million square miles). 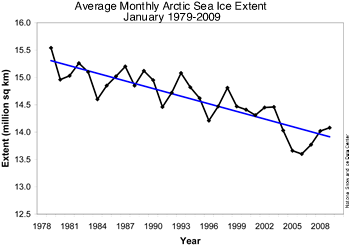 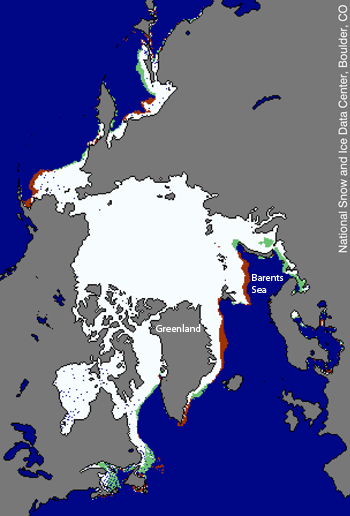 A balancing act of regional growth and decline 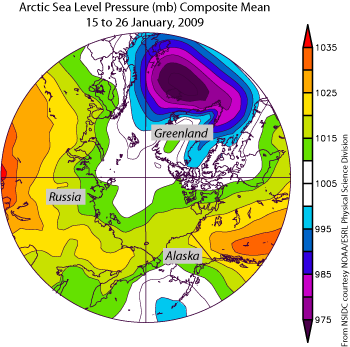 Figure 5. The map of sea level pressure (in millibars) averaged over the Arctic for the period January 15 to 26, 2009, reveals one of the reasons for the pause in ice extent change—the strong low-pressure feature (blue and purple) centered just south of Iceland.
—Credit: From National Snow and Ice Data Center courtesy NOAA/ESRL Physical Sciences Laboratory
High-resolution image

The reason for the pause in January average ice extent change

The pause in ice extent change from January 15 to 26 is somewhat similar to an event that characterized part of December 2008. Both times, the cause for the pause was an unusual pattern of atmospheric circulation.

January 15 to 26 saw very strong low pressure centered just south of Iceland—a very strong Icelandic Low . In accord with Buys Ballot’s Law, strong warm winds from the south and southeast encouraged ice decline in areas east of Greenland and in parts of the Barents sea area. The winds helped compact the ice cover and reduce ice growth. Regional winds from the north explain the increases in ice extent southwest of Greenland.

This strong Icelandic Low was present at the same time that atmospheric pressures were especially high over the subtropical North Atlantic. This large-scale pattern of atmospheric pressure and the regional pattern of changes in ice extent on the Atlantic side of the Arctic are classic signals of the positive phase of the North Atlantic Oscillation (NAO). The negative phase would have a weaker Icelandic Low, and roughly the inverse pattern of sea ice extent anomalies (the red and green in Figure 4 would be approximately reversed). The NAO has climate impacts not just in the Arctic, but in North America and Europe as well.