Arctic sea ice extent for June 2008 is close to that for 2007, which went on to reach the lowest minimum since at least 1979. More notably, however, satellite data indicate that melt began significantly earlier than last year over most of the Arctic Ocean. The large area of the Arctic Ocean covered by first-year ice (described in our June analysis), coupled with the early onset of melting, may mean more rapid and more severe summer ice retreat than last year. 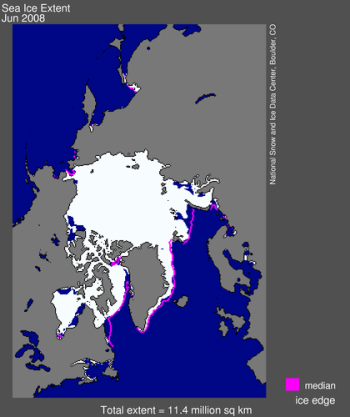 June sea ice extents in 2008 and 2007 are essentially identical, and near the lowest values for June ever recorded by satellite for the Arctic. 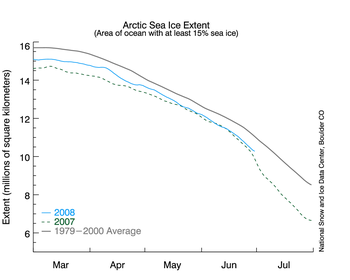 While sea ice extent averaged for June 2008 was similar to last year, there were pronounced differences in the spatial pattern of the retreat through the month. Last year, open water quickly developed along the coasts of the Chukchi and Laptev seas. This year, an unusually large polynya has opened in the Beaufort Sea, and there is significantly less sea ice in Hudson Bay and Baffin Bay. 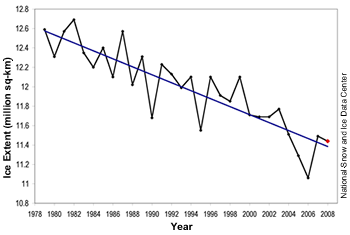 June 2008 compared to past Junes

June sea ice extent is very similar to last year and is now the third lowest on record. It lies very close to the linear trend line for all average June sea ice extents since 1979, which indicates that the Arctic is losing an average of 41,000 square kilometers (15,800 square miles) of ice per year in June. Last year, the rapid melt leading to the record-breaking minimum extent began in July. 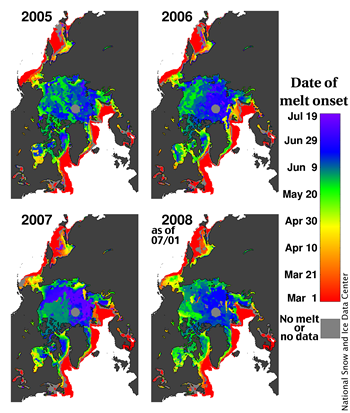 Figure 4. The colors in the above image indicate date of onset of melt over the Arctic Ocean. Light gray indicates areas that have not yet begun to melt this year, or areas for which data is not available. Data from the SSM/I sensor; algorithm used to process the data came from Thorsten Markus at Goddard Space Flight Center. 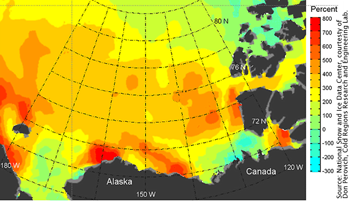 What are the implications of this year’s earlier-than-normal melt onset? As melting begins, the layer of snow on top of the ice becomes wet and then disappears, leaving bare ice and ponded water. Each of these changes reduces the reflectance of the surface—increasing absorption of solar energy, further reducing reflectance, and promoting even stronger melt. This is known as the ice-albedo feedback.

Early melt onset exposes the snow and ice to more days with low reflectance. It also increases the exposure during the critical early summer season, when solar energy is at its peak. As colleague Don Perovich of the Cold Regions Research and Engineering Laboratory notes, this combination enhances ice-albedo feedback (see Figure 5). Perovich calculated that in 2007, some areas of the Arctic absorbed eight times as much heat because of the ice-albedo feedback, contributing heavily to last year’s record-breaking melt.

The Study of Environmental Arctic Change program has released a Sea Ice Outlook for 2008. Their May report has predictions from a number of different scientific groups (including NSIDC) of how much sea ice will be left in the Arctic at the end of the melt season. The predictions range widely above and below last year’s record minimum of 4.13 million square kilometres (1.59 million square miles).