Taken together, an assessment of the available evidence, detailed below, points to another extreme September sea ice minimum. Could the North Pole be ice free this melt season?  Given that this region is currently covered with first-year ice, that seems quite possible. 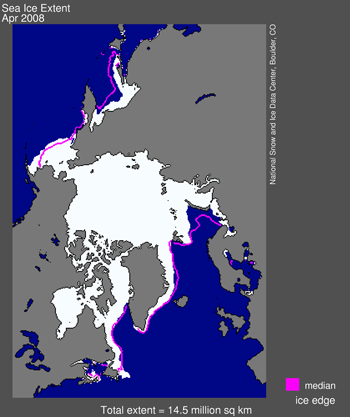 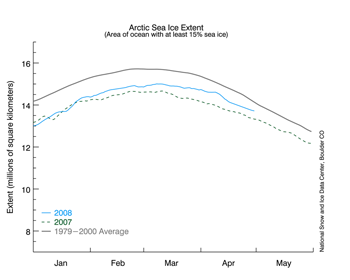 Although there is more ice than this time last year, the average decline rate through the month of April was 6,000 square kilometers per day (2,300 square miles per day) faster than last April. 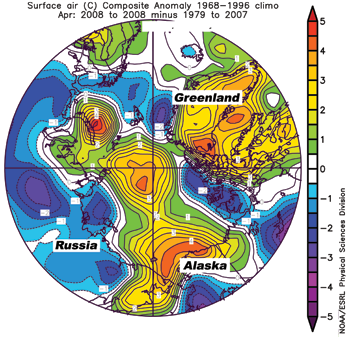 Figure 3. The spatial pattern of surface air temperature anomalies for April 2008, expressed with respect to the average for 1979 to 2007, shows unusually high temperatures over the Arctic Ocean and peripheral seas.

At least part of the explanation for this fairly rapid decline lies in the warm conditions that characterized April over the Arctic Ocean and peripheral seas. Anomalies over some regions exceed 5 degrees Celsius (9 degrees Fahrenheit). For the most part, this unusual warmth is consistent with shifts in atmospheric circulation that bring warm air into the region. The distinct hot spot near Novaya Zemlya, in the upper left quadrant of Figure 3, overlies an open water area where heat is being released to the atmosphere. In past years, this area tended to be ice covered in April, preventing this heat release. 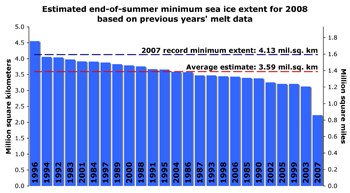 Figure 4. This bar plot shows estimates of sea ice extent at the 2008 September minimum based on known ice survival rates. The blue dotted line indicates the record-breaking minimum extent of 2007; the red dotted line shows the mean estimate based on all years between 1983 and 2007.

Estimating September extent based on past conditions

Sheldon Drobot at the Center for Astrodynamics Research at the University of Colorado at Boulder and colleagues have developed a sophisticated forecasting technique. The forecast considers sea ice extent, ice age, summer and winter temperatures, cloudiness, the phase of the Atlantic Oscillation, and climate trends as predictors (see the papers cited below for details; visit the Arctic Oscillation Index).  As reported last month, the Arctic Oscillation was in its positive phase through the winter season, associated with a wind pattern helping to flush thick ice out of the Arctic, leaving thinner ice.  This is one of the factors helping to set the stage for pronounced ice losses this summer. Drobot predicts a 59% chance of a new record minimum this year; read the press release. Todd Arbetter of the U.S. National Ice Center tells us that his group is working to implement a version of Drobot’s analysis scheme for operational forecasting.

Ronald Lindsay of the University of Washington’s Applied Physics Laboratory and collaborators recently published results from their own ice prediction system, based on a retrospective analysis of the modeled state of the ice and ocean system (see the paper cited below for details).  The model is successful in explaining around 75% of the year-to-year variations for the past few decades; for 2008, the model implies a very low, but not extreme, sea ice minimum. Lindsay cautions that sea ice conditions are now changing so rapidly that predictions based on relationships developed from the past 50 years of data may no longer apply. 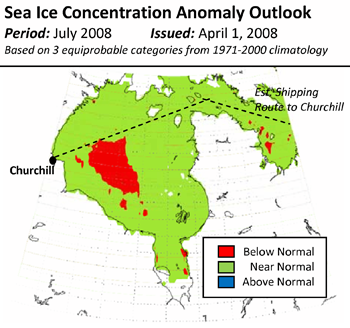 Marine transportation in the Arctic is expected to increase as ice extent decreases. However, the viability of shipping through the Northwest Passage in the Canadian Arctic Islands, the Northern Sea Route along the Eurasian coast and in other areas such as Hudson Bay depend on local ice conditions, which can be highly variable. Adrienne Tivy  at the University of Calgary and colleagues have investigated the variables that affect shipping in Hudson Bay. They found that the date on which shipping routes open across Hudson Bay to Churchill is most strongly correlated with sea surface temperatures between January and March and atmospheric pressure patterns in the East Atlantic in January. This year, Adrienne Tivy and colleagues predict that shipping to Churchill in a non-ice-strengthened vessel will be possible on July 16, 15 days earlier than the long-term mean of July 31. They estimate below-normal ice concentrations in the southwestern bay, but near-normal conditions elsewhere.