Arctic sea ice reached its yearly maximum extent during the second week of March, 2008. Maximum extent was slightly greater compared to recent years, but was still well below average.

Despite strong growth of new ice over the winter, sea ice is still in a general state of decline. The ice that grew over the past winter is relatively thin, first-year ice that is susceptible to melting away during the summer. Although natural variability in the atmospheric circulation could prevent the ice pack from breaking last year’s summer record, a closer look at sea ice conditions indicates that the September 2008 minimum extent will almost certainly be well below average.

Please credit the National Snow and Ice Data Center for image or content use unless otherwise noted beneath each image. 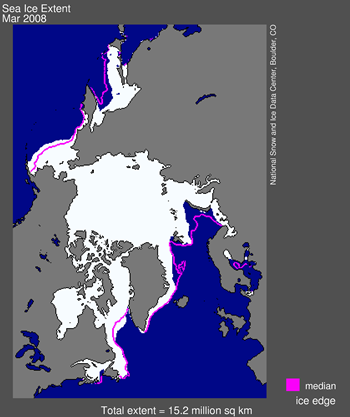 Figure 1. Arctic sea ice extent for March 2008, the winter maximum, was 15.2 million square kilometers (5.9 million square miles).  The magenta line shows the median ice extent for March from 1979 to 2000.
Please note that our daily sea ice images, derived from microwave measurements, may show spurious pixels in areas where sea ice may not be present. These artifacts are generally caused by coastline effects, or less commonly by severe weather. Scientists use masks to minimize the number of “noise” pixels, based on long-term extent patterns. Noise is largely eliminated in the process of generating monthly averages, our standard measurement for analyzing interannual trends. Data derived from Sea Ice Index data set.
—Credit: National Snow and Ice Data Center 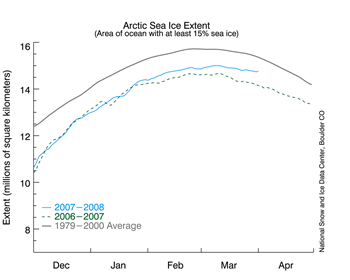 As Arctic sea ice extent shrank through the summer of 2007 to its record-setting minimum in September, the large open-water areas absorbed  a great deal of the sun’s energy.  Because the Arctic Ocean needed to lose this heat before sea ice could form, autumn freeze-up began rather slowly.   Once freeze-up began, it proceeded very quickly.

As Figure 2 shows, maximum sea ice extent usually occurs during the first week of March. Ice extent then begins its seasonal decline as springtime warming takes hold. In 2008, the maximum extent occurred about a week later than normal, with the extent below average. 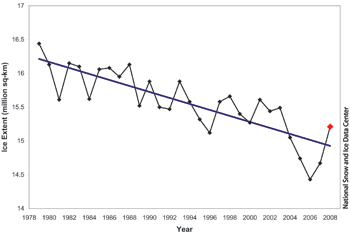 March 2008 compared to Marches past

Figure 4. Map of estimated ice age for the third week of March for 2007 (left) and 2008 (right). Dark blue indicates first-year ice; red indicates ice that is 6 years old or more; grey is land and white indicates areas where ice age is not tracked. Colleagues James Maslanik, Chuck Fowler, and Sheldon Drobot at the University of Colorado at Boulder developed this image. 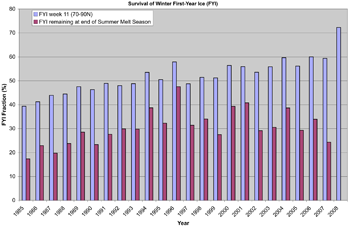 As the winter extent numbers indicate, new ice growth was strong over the winter. Nevertheless, this new ice is probably fairly thin.  Thin ice is vulnerable to melting away during summer. Figures 4 and 5 indicate that relatively thin, first-year ice now covers 72% of the Arctic Basin, including the region around the North Pole; in 2007, that number was 59%.  Usually, only 30% of first-year ice formed during the winter survives the summer melt season; in 2007, only 13% survived. Even if more first-year ice survives than normal, the September minimum extent this year will likely be extremely low.

Why is there so much first-year ice this spring?  Partly, it is because last summer’s record-breaking ice loss created extensive open-water areas in which new ice could form.  Anomalous winds in winter can also flush thicker, older ice out of the Arctic, leaving the Arctic with a greater coverage of first-year ice.  As noted by our colleague Ignatius Rigor of the University of Washington at Seattle, this winter saw a return of the Arctic Oscillation to its positive mode, an atmospheric pattern especially effective in flushing out thick, old ice.

So what about the multi-year ice that remained after last year’s record ice loss? Jennifer Kay and colleagues at the National Center for Atmospheric Research found that last summer’s clear skies allowed for more intense melt of the multiyear ice, leaving it  thinner than normal at summer’s end.

For more on the Arctic’s transition towards younger ice, see an animation of changing sea ice age (scroll to Figure 4 of August 22, 2007 entry) by colleague Jim Maslanik and coauthors. 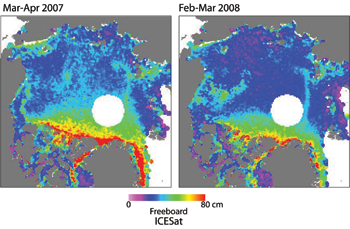 A look at sea ice thickness

Another way to study sea ice thickness is to look at freeboard, or the amount of ice and snow that protrudes above the water surface. New information on ice thickness is coming from NASA’s ICESat instrument, a spaceborne laser altimeter.  Colleague Ronald Kwok at the Jet Propulsion Laboratory uses data from ICESat to study freeboard. His findings indicate that  freeboard in the spring of 2008 is 5 to 10 centimeters (2 to 4 inches) less than in spring 2007, pointing to thinner sea ice.